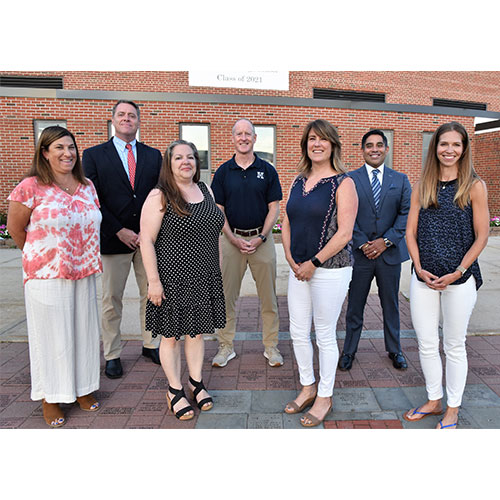 The Huntington UFSD Board of Education is ready to lead in the 2021/22 school year, which officially got underway on July 1. 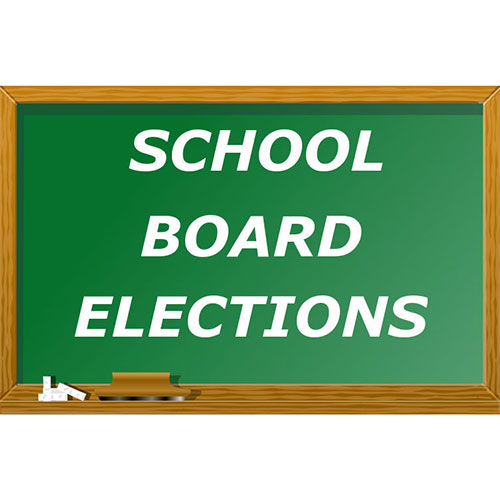 Current Huntington School Board members Christine Biernacki and Lynda Tine-D’Anna and challengers Thomas Galvin and Theresa Sullivan will be on the ballot when Huntington School District residents will cast their votes on Tuesday, May 18 in the Huntington High School gymnasium from 6 a.m. to 9 p.m.

Presentations to the Board

Board Resolutions and Regulations

Subsequent Audit Committee minutes can be found on boardDocs

About the Board of Education

The members of the Huntington School Board are elected by the residents of the community to manage and oversee all aspects of the district’s educational program, personnel, properties and financial affairs. Trustees serve three year terms without any form of compensation. Members develop an annual budget and submit the proposal to voters for approval. They appoint administrators to conduct the day-to-day affairs of the district, faculty to provide instruction and support staff to ensure the smooth operation of the school system.

State Education Law grants school board members the authority to enact the policies and regulations they feel are necessary to fulfill their responsibilities and to provide students with the education they are legally entitled to and deserve. The school board’s oversight responsibilities include the admission of students, instruction, discipline, grading, classification of special education students, appointing and managing all employees, entering into contracts, purchasing, leasing, maintenance of buildings, property, equipment and supplies and every other area of district operation.

School board members meet regularly in executive session to discuss personnel and legal matters and in public to receive reports from officials, discuss policies and attend to the district’s financial and educational affairs. An agenda is published prior public meetings and residents are provided an opportunity to address trustees. Detailed minutes of each meeting are kept by the district clerk.

The school board is entrusted with the ultimate responsibility for the proper education of all young people within the district who are enrolled in the public school system and in safeguarding the financial and material resources provided by residents through the years. 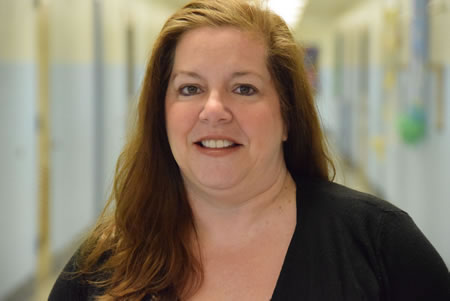 Raised in the town of Huntington, Mrs. Biernacki attended school in South Huntington. She holds a Bachelor of Arts degree in economics from the University of Connecticut and a Juris Doctor from the Hofstra University School of Law. She is a partner in a New York City law firm.

Over the years, Mrs. Biernacki has served on the district Safety and Shared Decision Making Committees and on the Committee for Special Education.

Mrs. Biernacki’s service to the community’s children predates the start of her own family. She served president of the Huntington Sanctuary Project’s advisory board. Mrs. Biernacki and her husband offered their house as a host home for Sanctuary, opening their doors to runaway youth so that the families could participate in mediation to resolve their issues and bring the youngster home.

Mrs. Biernacki has also served as president of the Town of Huntington’s Youth Bureau Board. She was recognized for her work with runaway and homeless youth by the Association of New York State Youth Bureaus and the Empire State Coalition of Youth and Family Services.

A longtime attendee of Huntington School Board meetings, forums and conferences, Mrs. Biernacki has become well versed in many education issues. She has advocated for reforms in school aid, teacher evaluation and special education, among other areas. She comes from a family filled with educators and strives to work in a manner that will honor that tradition. 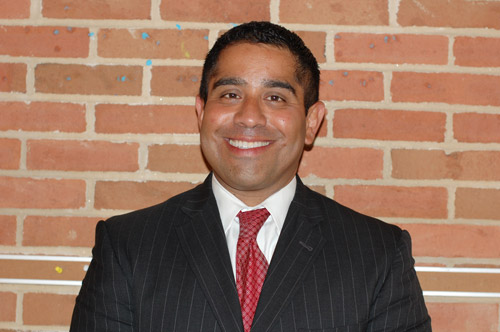 Xavier Palacios was elected to a fourth term on the Huntington School Board in June 2020. His fellow trustees chose him to serve as the board’s vice-president for the 2020/21 school year. He has enjoyed a long association with the district.

A member of Huntington High School’s Class of 1988, Mr. Palacios earned a Bachelor of Arts degree at Columbia University and a Juris Doctor at Boston University’s School of Law. He is the owner and managing partner of a Mineola-based law firm with multiple satellite offices.

Mr. Palacios and his wife, Laura have three children, including a daughter who was a member of Huntington’s Class of 2016 and who graduated from the University of Pennsylvania in 2020; and two daughters in the fifth and seventh grades, respectively at Woodhull Intermediate School and J. Taylor Finley Middle School. Both of the younger children have studied in the district’s dual language program.

In 2008, Mr. Palacios purchased and renovated a distressed property in Huntington Station where he established a satellite law office along with a community revitalization non-profit organization. He is a member of Huntington Hospital’s Board of Trustees.

Mentoring has been a priority throughout Mr. Palacios’ life. At Columbia, he taught SAT prep and biology courses to inner city students. He has continued mentoring young people and families in the community and encouraged parents to be actively involved in their child’s education. He has been recognized for his work in the community and his efforts to strengthen opportunities for young people.

Mr. Palacios volunteered to serve as the high school mock trial team’s legal advisor, training students in the art of courtroom skills and strategies. The countless hours of preparation has established Huntington as one of Suffolk’s top programs. The Blue Devils won the 2018 county title and concluded the season at the state finals ranked No. 3 in New York.

Mr. Palacios has also worked behind the scenes with coaches and athletes to help spur participation and promote excellence in the Blue Devil athletic program.

During his time on the Huntington School Board, Mr. Palacios has strived to be a problem-solver and to use his legal expertise to contribute to solutions regarding pressing issues facing students, teachers and taxpayers. 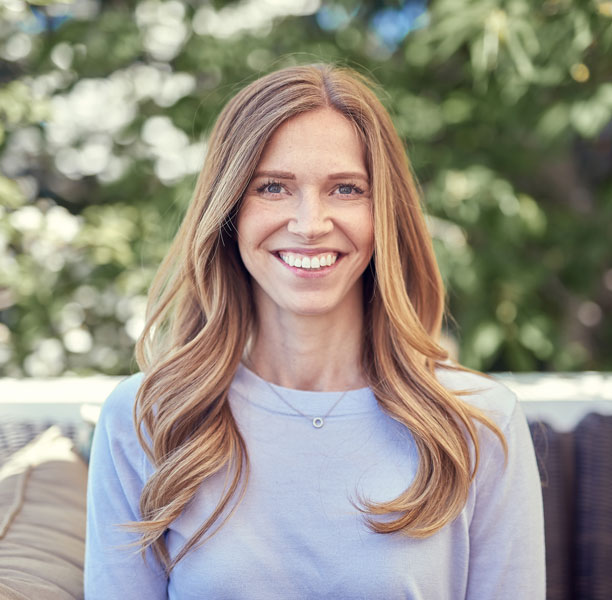 Kelly Donovan was elected in June 2020 to serve a three-year term on the Huntington School Board. She grew up in nearby Northport and she and her husband, Dave, have been Huntington residents for nearly a decade.

Mrs. Donovan attended Fordham University in Lincoln Center, earning a Bachelor of Arts degree in communications. She lived and worked in New York City following graduation. She forged a successful career in marketing with such notable brands as Harper Collins, CNET and Yahoo! prior to co-founding a small business - Craftree - in Huntington Village.

An active and engaged parent to her two daughters at Woodhull and Jefferson, Mrs. Donovan has always played a significant role in the PTA, from corresponding secretary to co-president, and has chaired countless PTA events. She is currently co-vice president of the Woodhull PTA.

Mrs. Donovan has established strong bonds with local parents and community members and has a deep appreciation for the Huntington School District and its rich academic, extracurricular and cultural offerings. 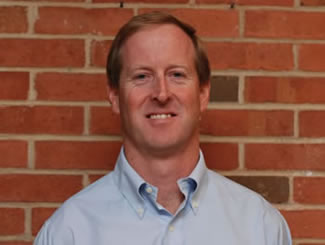 William P. Dwyer was first elected to the Huntington School Board in May 2008. His fellow trustees selected him to serve as the Board of Education president on three separate occasions. After leaving the Board for two years, he was again elected in May 2013, May 2016 and May 2019 for three-year terms.

Mr. Dwyer and his wife Karen are the parents of three sons who are all Huntington High School graduates.

Mr. Dwyer, who grew up in Middlebury, Connecticut, earned a B.S. degree in mathematics at Providence College and a second B.S. degree in mechanical engineering at Washington University in St. Louis. He obtained a Master of Science degree in aeronautics and astronautics at Massachusetts Institute of Technology.

In his time with Northrop Grumman, Mr. Dwyer rose from an entry level engineer position to that of group leader, winning several NASA contracts for aerodynamic design tasks on the next generation supersonic commercial airplane.

Mr. Dwyer left the aerospace industry to join a health publishing company in New York City, assuming responsibility for its networking, website and communications infrastructure, eventually rising to the post of vice-president of operations. After eight years he decided to start his own publishing company, which focused on producing patient education materials to aid in chronic disease management and developing unique community outreach programs.

Mr. Dwyer is currently employed as an account executive for an educational technology company based in Hauppauge, working with school districts throughout the Northeast to help them maximize their investment in software to benefit their operations.

As a participating member of the Ancient Order of Hibernians and the Huntington Village Lacrosse Club, Mr. Dwyer has been active in the community. 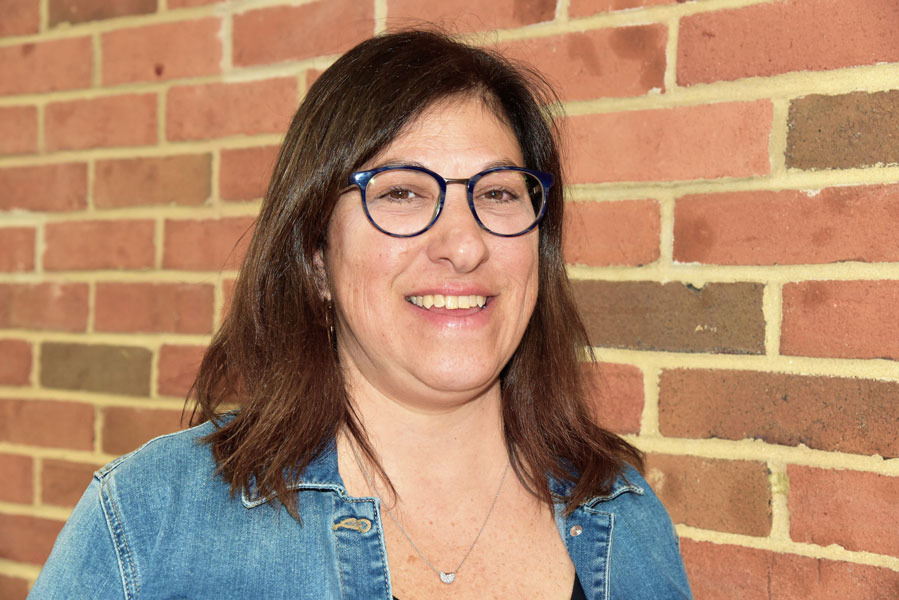 Michele Kustera was elected to the Huntington School Board in May 2019. She has lived in Huntington with her husband, Dave for 17 years. Together they have a daughter in her junior year at Huntington High School and a daughter who is an eighth grader at J. Taylor Finley Middle School.

A Long Island native, Mrs. Kustera is a graduate of W.C. Mepham High School in Bellmore. She obtained a Bachelor of Science degree in marketing at St. John’s University in 1987.

Prior to moving to Huntington, Mrs. Kustera resided in Alexandria, Virginia, working with professional associations as a consultant implementing technology systems. She returned to New York in 1997 and worked in New York City for the Direct Marketing Association and the American Institute of CPA’s as technology/project director.

A longtime member of district PTA organizations, Mrs. Kustera was serving as the PTA Council president at the time of her election as a trustee. 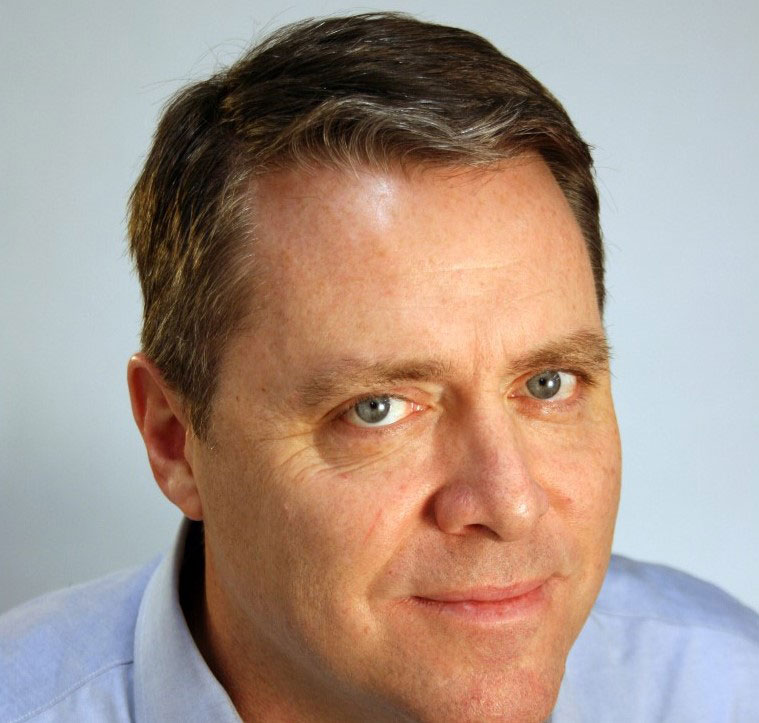 Thomas Galvin and his wife Anna, a Huntington High School graduate, moved to the district 18 years ago from New York City. They have two children studying at Huntington High School, both of whom participated in the dual language program and are involved the interscholastic athletics program as well as the arts, stage crew and band.

Mr. Galvin obtained a bachelor’s degree at the University at Albany in 1988 in history and political science, and master’s degrees in social studies education and education administration.

Currently the chairperson of social studies at New Hyde Park Memorial High School, Mr. Galvin has been a representative on his district’s diversity task force. He led his department to first utilize distance learning technology and oversaw a nationally recognized Model U.N. program.

Mr. Galvin has coached soccer at the YMCA and with the Cold Spring Harbor Huntington Soccer Club and lacrosse with HV Lax. He helped create Huntington High School’s Model U.N. Club and is a Booster Club member. An avid musician, his band has performed in benefits at both Southdown and Flower Hill schools. 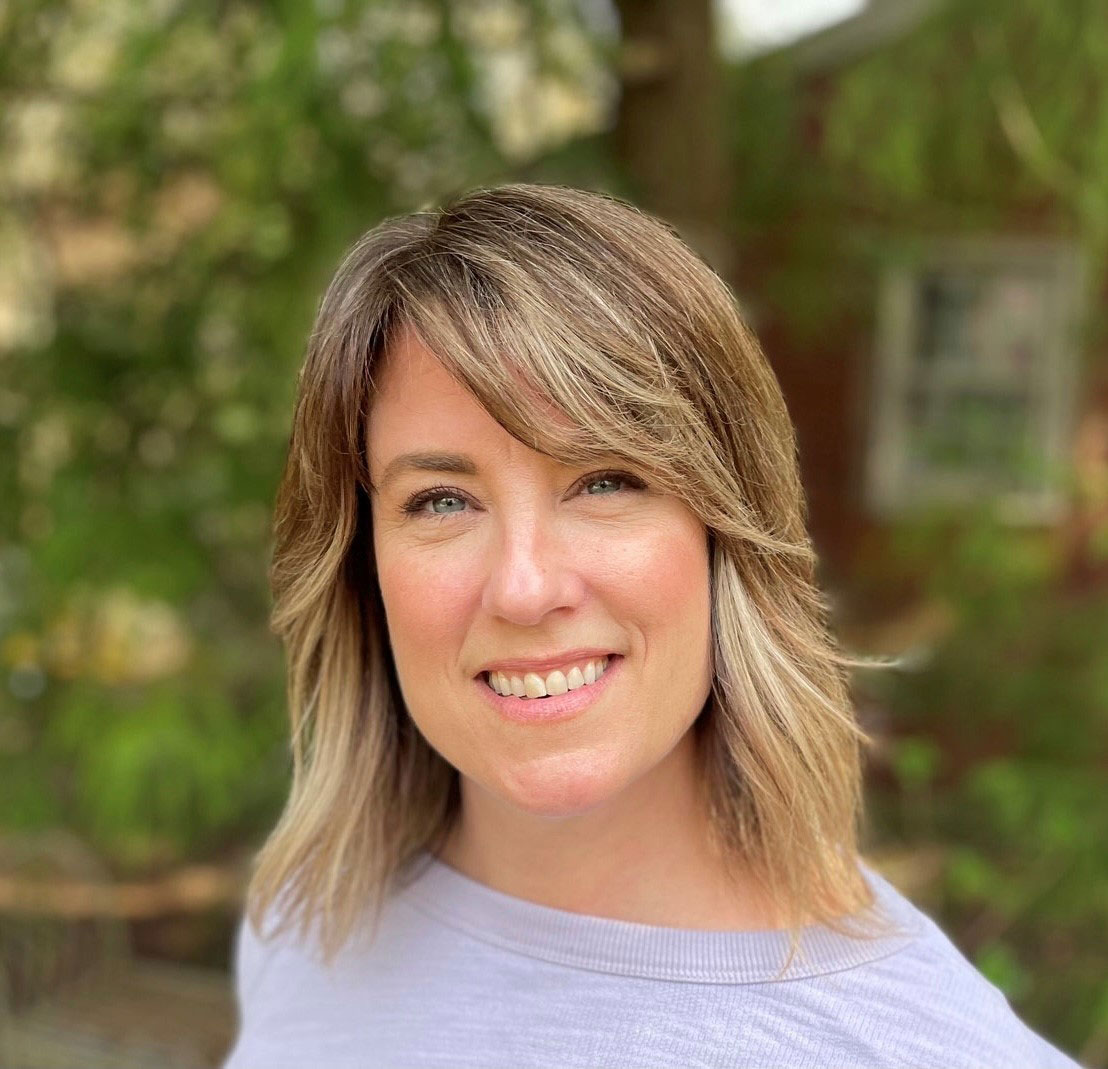 Theresa Sullivan graduated from Huntington High School in 1992 while also earning a cosmetology license thorough the Western Suffolk BOCES vocational program. She went on to earn a BA degree in business communications at Rider University.

After a decade in management for Coach and Christian Dior, Mrs. Sullivan has been working locally in her family’s salon in Huntington village.

Mrs. Sullivan is committed to service in the community at large. After creating Huntington Hospital Meals, an initiative that helped support local restaurants and hospital staff during the COVID-19 pandemic, she was appointed to the town’s Small Business Task Force to create a vision for the continued economic success of the community.

Mrs. Sullivan and her husband, Dan are proudly raising their two daughters in the district and are always happy to roll up their sleeves and get involved with the many extracurricular programs it offers. She hopes to bring her passion for the community to ensure that all stakeholders have a voice in the evolution of Huntington UFSD.

Scroll for Audio and Minutes

Audio file for the May 13, 2019 BOE Meeting. Closed captions are available

Audio file for the June 4, 2018 Board of Education Meeting. Closed captions are available.

Audio file for the May 7, 2018 Budget Hearing Meeting. Closed captions are available.

Board of Education Meetings

All public session meetings start at 7:30 p.m. and are held in the Adam Spector Auditorium at Jack Abrams STEM Magnet School, except for the August* meetings which start at 7 p.m.

'What to Expect' at Board of Education Meetings