Huntington High School Habitat for Humanity club members put the mid-winter vacation to good use. The teenagers volunteered to help build a house for a family of five at 73 Old Quogue Road in Riverhead.

Huntington Habitat participated in two separate “builds” at the site. Ms. LoTurco, Ms. Nitekman, Victoria Befumo and Sophia Thomson went on the first one with Ms. McCallion, Ms. Befumo, Rachel Deegan and Kathryn Sanseviro heading out east for the second of the two daylong events. Mr. Gilmor accompanied the students.

“As a student, I can confidently say that all of those who participated have found a new level of thankfulness for those who work in construction,” Ms. McCallion said. “We are all able to say how thankful we were to just be a minor part of doing such a big thing for the lives of a few people. Seeing so many people come together with such joyful spirits in order to help a family in need really spoke to the society we are a part of.”

The Huntington club members worked on the “build” organized by Suffolk Habitat for Humanity on behalf of a mother of three who lives with her two daughters, son and a grandchild. The family’s apartment is too small for the group to sit at a table and eat a meal together. They even converted the living room into a bedroom.

“Contributing to a family in need was a highly rewarding experience,” Ms. LoTurco said. “We all worked hard all day on the build on behalf of such a worthy purpose. As this was my first build, I am amazed at how truly dedicated Mr. Gilmor is, and has been for so many years. We all admire him for his commitment to this charity and for the role model he is for all of us students.”

The Huntington chapter was founded in 2003 when Mr. Gilmor was hired as a high school dean. He organized the club, which included a very energetic and enthusiastic group of young people who helped the group establish a solid footing that has endured.

That same commitment to helping others was evident last week. “I have never seen a group of people that were so enthusiastic to spend their time doing a good deed for others,” Ms. McCallion said. “The build definitely put things into perspective and allowed me to find a new level of thankfulness for all of the things I own as well as the work other people have put into making the things I own. Even the simple action of hammering a nail to connect two pieces of wood really showed me how intricate construction truly is and the high level of effort that is needed to make it successful. We were all so happy and excited to join Gil (Robert Gilmor) and fellow members of Habitat for Humanity and come together and build a house for the family in need.”

The COVID-19 pandemic has presented many obstacles, but Huntington’s Habitat for Humanity chapter has endured.

“Habitat has been going great,” Ms. Nitekman said. “Though we have had some travel limitations due to COVID, we have continued to provide for our local communities. Over the February break, we volunteered for a local build in Riverhead, Long Island. Here, we came together and enjoyed our day building a future home for a family that needs one. We as a group can agree that coming together for a build makes us feel so beyond grateful that we have this opportunity to give back and create a beautiful home for those in need.” 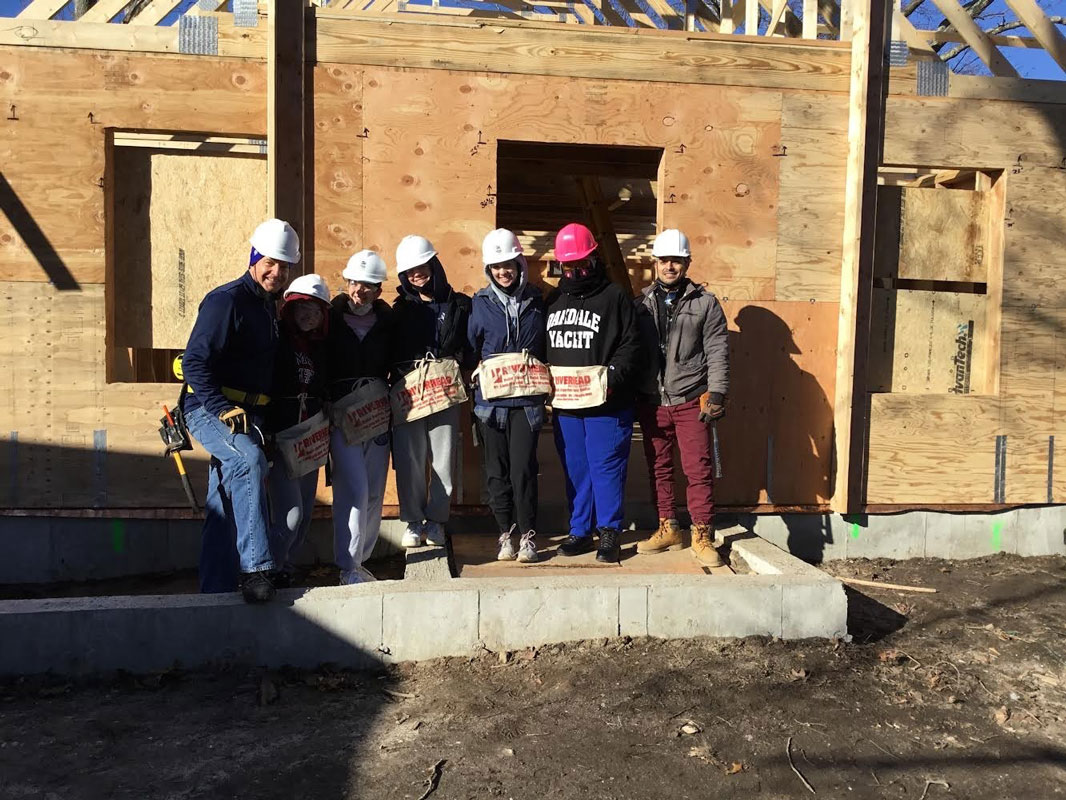 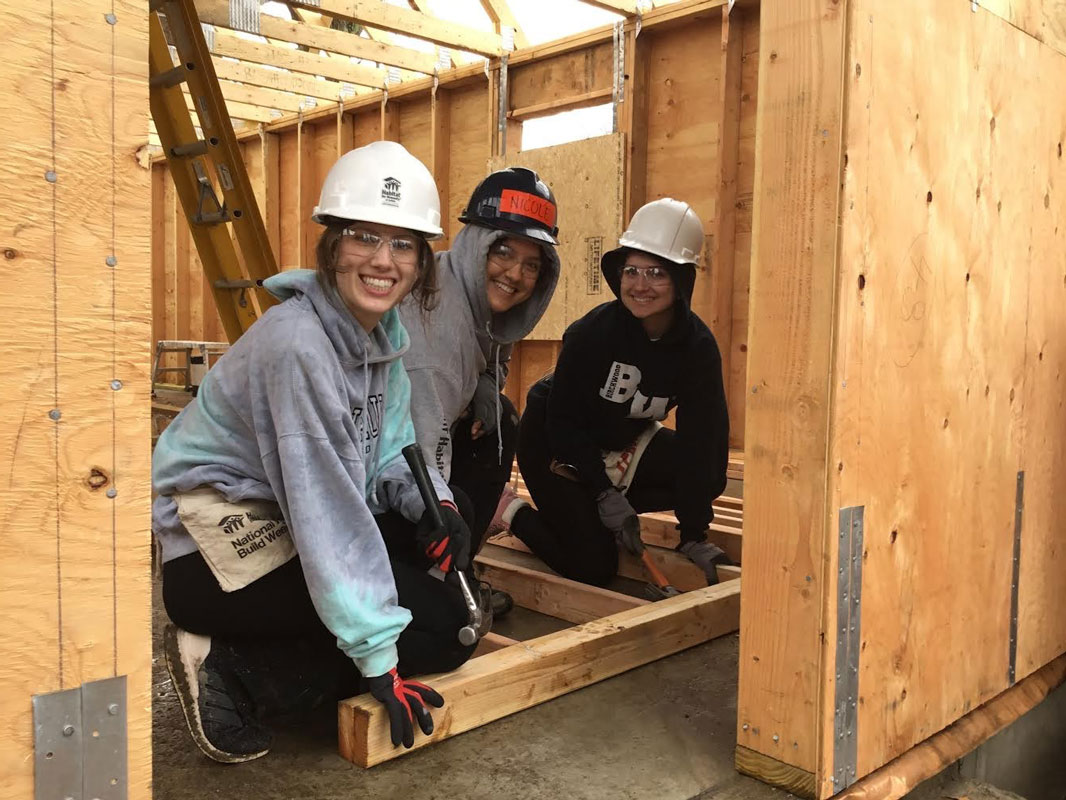 Huntington Habitat members found the build experience to be rewarding. 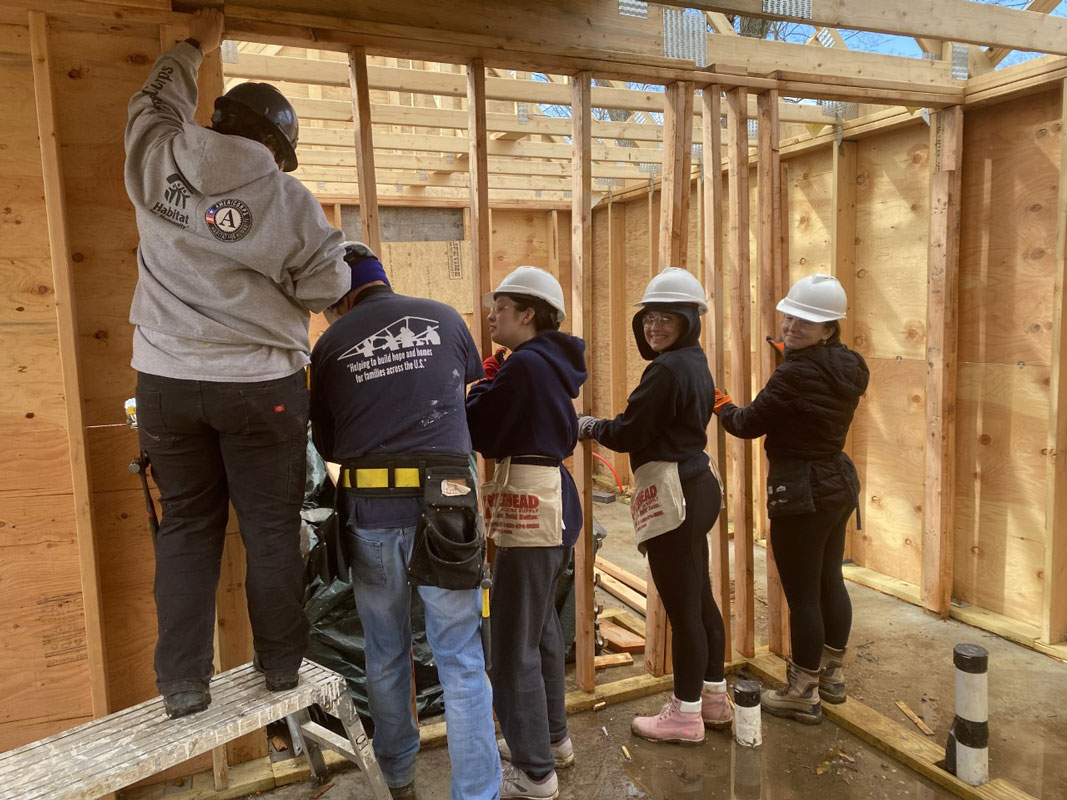 The Huntington Habitat members volunteered during their vacation.

Huntington Habitat members found the build experience to be rewarding.

The Huntington Habitat members volunteered during their vacation.