Katerina Damiano stole the show at the Locust Valley Film Festival. The Huntington High School junior won four awards, including ones for Overall Outstanding Film and Best Overall Editing and first place in comedy for “Mortified,” plus second place in comedy for “Ashes to Ashes.”

Student filmmakers from seven Long Island districts vied in eight award categories. Huntington seniors Jack O’Brien, Eliza Walther and Ally Kustera were among the filmmakers participating in the festival with their movies. 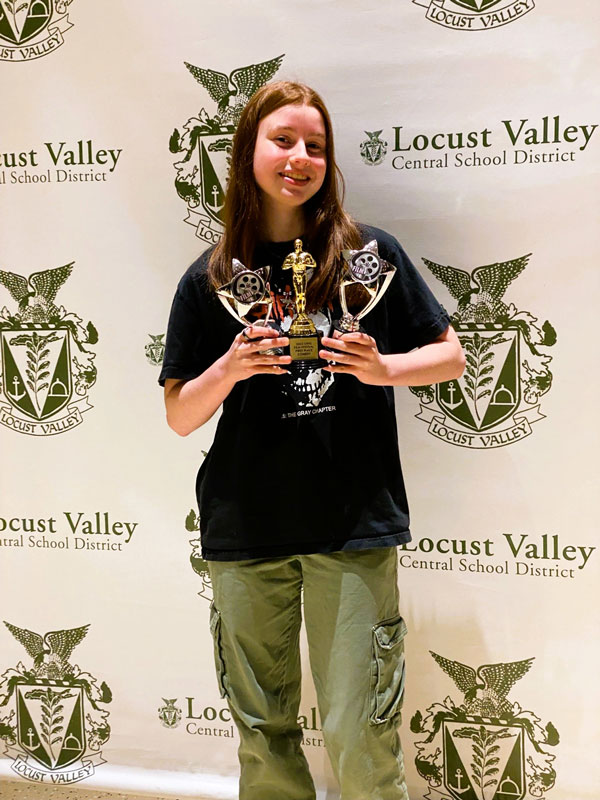 Huntington's Katerina Damiano with her awards at the Locust Valley Film Festival.

“Surrounded by a very talented group of young filmmakers at Locust Valley, we screened 72 films,” said Heather Swan, who leads Huntington High School’s video arts program. “We were all so excited to watch Katerina steal the show. The honor of winning the Outstanding Film award also means her film ‘Mortified’ will be shown at the Long Island International Film Expo in July. From writing and directing to filming and editing, Katerina is a true filmmaker and I am so excited to continue working with her next year in the video program.”

“The film festival was great,” Ms. Damiano said. “It was so cool to get to see short films by high schoolers from all over Long Island. Getting feedback on my short films from a live audience and judges was a really great experience.”

Ms. Damiano will be returning to Huntington High School in September for her senior year. Looking ahead to college, she is currently interested in UCLA and New York University’s Tisch School of the Arts with plans to study film. Her summer plans include traveling to California to visit several schools. She also plans to use July and August to make another short film to add to her growing portfolio.