Alexa Edwards stood on the stage in the same auditorium that her father, Dennis Edwards filed into dozens of times during his time at Huntington High School. She was only 2½ years old when the Class of 1984 member was felled on the morning of September 11, 2001 while working as a partner with global bond giant Cantor Fitzgerald atop One World Trade Center in Manhattan.

Mr. Edwards was among the nearly 3,000 innocent Americans, including more than 400 uniformed firefighters and police officers who were killed when terrorists hijacked four planes on the morning of 9/11/01 and staged suicide attacks by flying them into the north and south World Trade Center towers and the Pentagon. The fourth plane crashed in an open field near Shanksville, Pennsylvania when passengers tried to overwhelm the terrorists and prevent them from completing their attack on a destination believed to be either the US Capitol or the White House. 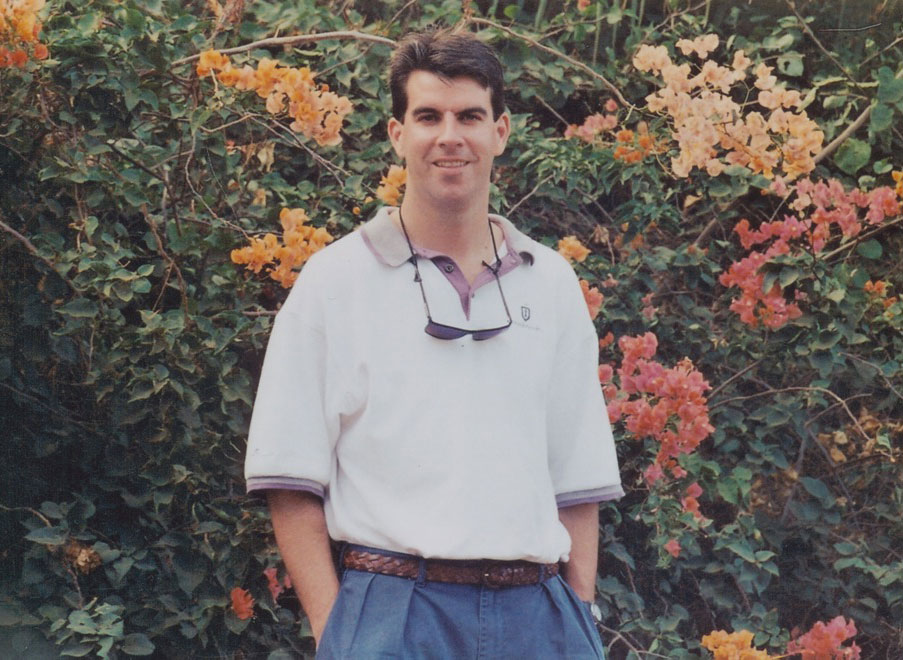 The Huntington alum was near the top of the north tower (One World Trade Center) when the hijackers crashed American Airlines Flight 11 into the building’s north façade at about the 80th floor at 8:46 a.m. The attack killed 1,402 at or above the impact zone.

Known around town as “The Mayor,” Mr. Edwards married his high school sweetheart, Patti and the couple bought her parents’ home. Mr. Edwards renovated the structure himself, a testament to his ingenuity and determination.

The Huntington grad was all about people and helping them. When terrorists bombed the World Trade Center in 1993, Mr. Edwards carried a pregnant woman down 80 flights of stairs and saved her life.

Alexa Edwards came to her father’s alma mater to present the first ever Dennis M. Edwards Memorial Scholarship in the amount of $5,000. It was created by Mr. Edwards’ eldest sister, Sheila Edwards Doyle.

Huntington Class of 2022 member Keylin M. Quintanilla Villalobos captured this year’s scholarship. Inducted into four separate academic honor societies, the teenager intends to begin studying for a career as a teacher at Suffolk County Community College in the fall. The keys to her success have been believing that anything is possible, being patient and learning from others.

“Although I was just two-and-a-half [years old] when my dad passed away, I had the privilege of getting to know my dad through the people he loved,” Ms. Edwards told a crowd of about 300 at Huntington High School’s senior scholarships and awards ceremony. “Anyone who knew my dad will tell you that the only thing he loved more than life itself was his people. Lucky for me, shortly after the 9/11 attacks, my Aunt Sheila asked our family and friends to write letters to me about my dad. Countless people wrote about my dad being their ‘go-to.’ He was the person that people felt comfortable asking for help.”

As Ms. Edwards spoke in a strong voice, it was hard to keep a dry eye. “One of his friends wrote that ‘Dennis was always there for us . . . especially in vulnerable situations,’” Ms. Edwards said. “People were not afraid to show my dad their vulnerable side because they knew he would meet them where they were at. Not only did he love being asked to help, but he genuinely appreciated the act of helping. Through his care for others, his charisma and his passion to help, my dad left a legacy of service. He lived a life in which he worked to leave each person better than he found them.”

Named a Distinguished Senior last spring after compiling an academic average of 90 or better during every semester of high school, Ms. Quintanilla Villalobos served as vice president of a pair of Huntington clubs and volunteered at her church during the COVID-19 pandemic.

“Keylin, much like my dad, exhibits an empathetic nature for those in her community,” Ms. Edwards told the crowd. “At 13 years old, she moved to the United States as an English language learner. Through her hard work and resilience, she excited the English as a new language program in just three years. However, rather than leave it behind, she went above and beyond to help those currently in it through the New World and United Amigos clubs. She recognizes the vulnerability that comes with learning a new language and connects with each student she serves. She helps with the transition to high school in a new country, both academically and socially. It is evident that she serves the community from her heart and doesn’t expect anything in return.”

Known for her happy disposition, positive personality and sincere smile, Ms. Quintanilla Villalobos is respected and admired by her classmates and teachers.

“Like my dad, Keylin is recognized by her elders as someone wise beyond her years with a good head on her shoulders,” Ms. Edwards said. “She demonstrates humility and appreciation to all who have aided in her successes. It is an honor to present her with the first annual Dennis M. Edwards Memorial Scholarship.”

Through the scholarship presented in his honor, Mr. Edwards’ legacy continues to live on at his alma mater. 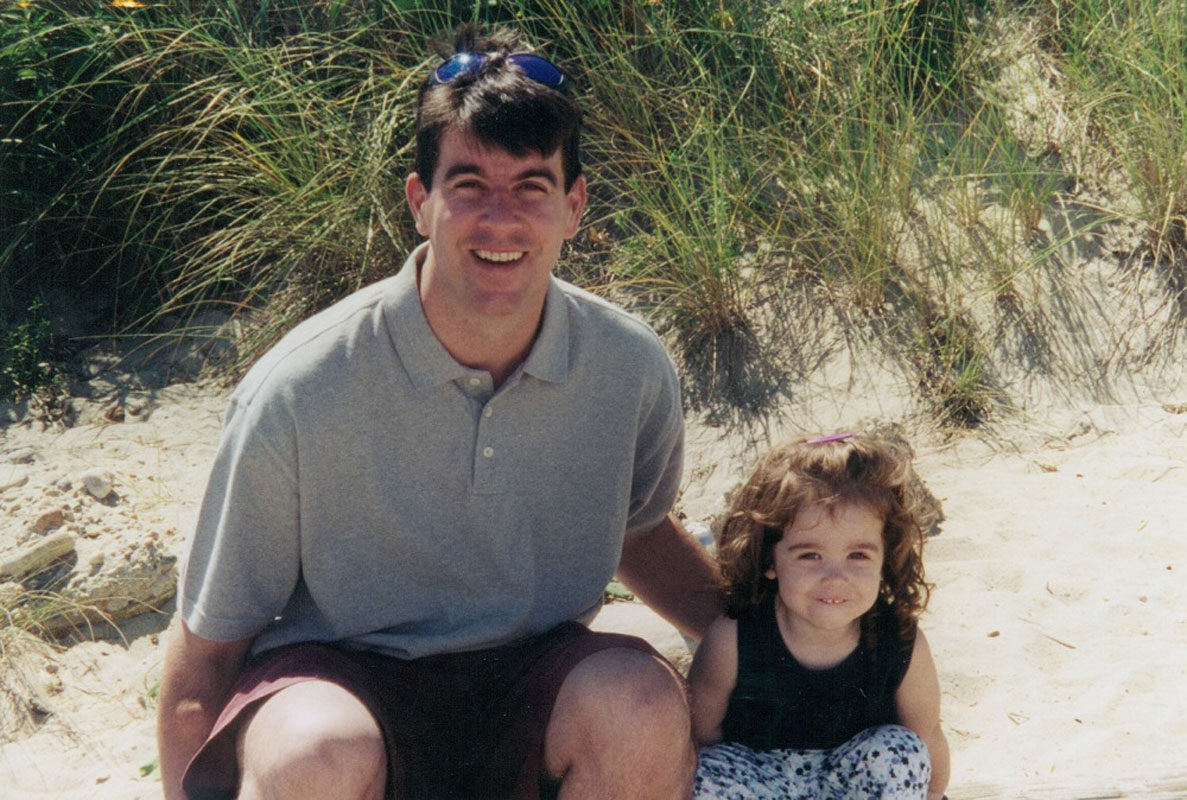 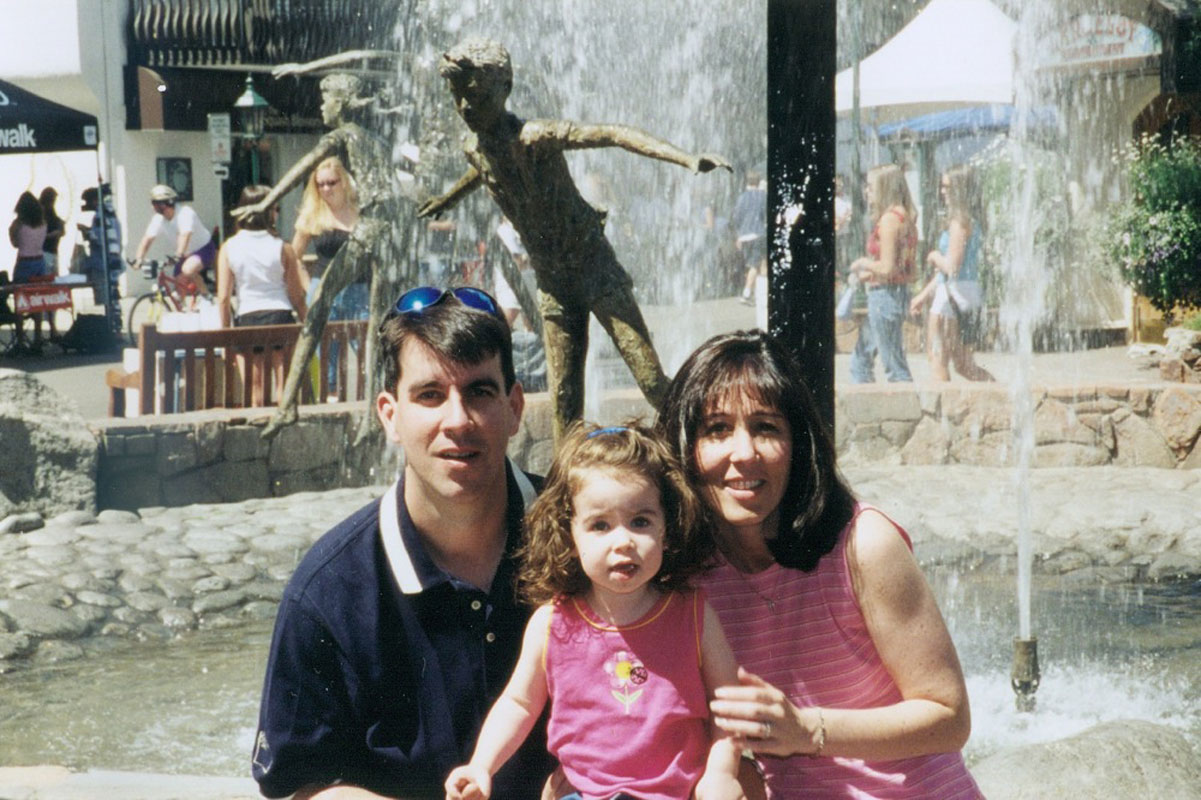 Dennis and Patti Edwards with their daughter, Alexa.

Dennis and Patti Edwards with their daughter, Alexa.