Huntington High School’s Art Honor Society mobilized earlier than it probably ever has as members of the group went to work on decorating The Rock to commemorate the 20th anniversary of the September 11, 2001 terrorist attacks.

The new school year hadn’t even officially started and the high school’s creative artists could be found on the corner of the north side exit/entrance at The Rock, which has been decorated for special events for decades.

With colorful paints and paint brushes in hand, the teenager’s went to work, using a design inspired by senior Erik Flores Reyes. “I am so proud that we had the opportunity to share our artwork that reflects the memory of the World Trade Center,” said art teacher Jenna Rinaldi, who serves as the Art Honor Society’s faculty advisor.

“A few our of Art Honor Society members came together to commemorate the anniversary of 9/11,” said senior Grace Colavecchio, who had family working in Manhattan on that terrible day two decades ago. “We transferred Erik Flores Reyes’ sketch onto The Rock. It was a nice way for the Art Honor Society to start off the year and honor those lost on September 11th.”

Sophomore Sophia Tine was among the participants and she, too, had family in New York City on that fateful morning. While none of the students were alive on that day, they are all very familiar with the death and destruction and the incredible courage that was witnessed.

Huntington’s Art Honor Society chapter was created to inspire and recognize those students who have displayed outstanding ability in art and to further the creative abilities of its members.

The organization assists its members who are working toward the attainment of their highest potential in the field of art. The society also helps to being art to the attention of the school and community at large, increasing awareness of art in relation to other curriculum areas. 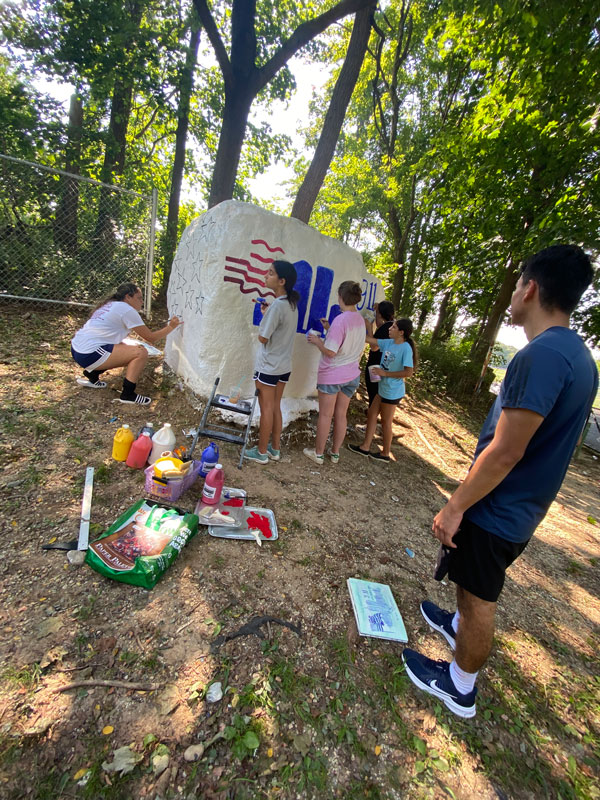 Art Honor Society members sprang into action prior to the first day of school.

Art Honor Society members sprang into action prior to the first day of school.