J. Taylor Finley Middle School has a fresh new look. The 56 year old metal canopy that ran along the curb in the front plaza and stretched from the east to west entrance/exit doors and partially obscured the view of the building is no more The school now has a more modern and colorful appearance.

The original hulking metal canopy and columns were completely demolished and carted away this summer. Facilities workers utilized a variety of tools and machinery to remove the structure. The Landtek Group then reconstructed the front curb and sidewalk areas.

M&M Awning fabricated new blue awnings supported by white stanchions extending out from each set of doors on either side of the front of the building. Both awnings have 14 recessed lights under them for evening use. Fabric installed under the arched awnings will prepare birds from nesting.

New mulched gardens have also been created along both awnings. J. Taylor Finley Middle School is spelled out in arched white letters on the front of both awnings, which are expected to be in service for many years.

The building can now be seen unobstructed by those driving along Greenlawn Road as well as by visitors to the school. The vivid blue awning color has created a fresh look that is catching the eye of everyone who glances at the building.

“The original awning needed regular and expensive maintenance and its complete replacement was prohibitively costly,” Mr. Austin said. “We are very happy with how the project turned out.

Several other summer projects were completed at Finley. The school’s original boilers were removed and replaced with modern, efficient units. Several science lab rooms were completely renovated. The tennis courts were resurfaced. A new sprinkler system was installed on the main athletic field. A new handicapped accessible bathroom was installed in the nurse’s office.

“We’ve made many improvements to Finley in recent years, including completing renovating the auditorium and replacing all of the original student lockers,” Mr. Austin said. “We also renovated the main lobby area known as the Blue Zone. Even more renovations are in the pipeline.”

J. Taylor Finley Junior High School opened in late September 1965. The structure wasn’t quite completed yet, but the district needed the space badly so it came on line as soon as its classrooms were ready.

Finley actually consists of two separate buildings constructed side by side and connected by two hallways. The building that fronts Greenlawn Road contains most of the classroom space and also includes offices and the library. The rear building features the cafeteria, gym, shops and music rooms.

When Finley opened the rear building wasn’t yet complete, so students ate lunch in their classrooms. The school was formally dedicated on May 1, 1966. The new Finley band, orchestra and chorus performed, retired Superintendent J. Taylor Finley was on hand as the guest of honor and founding Principal Anthony L. Quintilian introduced various dignitaries on hand, including Huntington School Board President George B. Wheeler, Jr. and Superintendent of Schools Dr. Charles T. St. Clair.

The artist’s rendering of the school on the cover of the dedication program actually differs in a few ways from what was constructed, including the placement of the flagpole.

“The J. Taylor Finley Junior High School has been designed for optimum efficiency and maximum flexibility,” according to the dedication program. “The various arrangements of sliding doors, which form small and/or large instructional areas, as the need arises, present many possibilities for large group instruction, individual study programs and seminar classes.”

The building featured a “lecture room,” which quickly became known by the acronym LGI for large group instruction room. It had seats for 375 students. The seats came with writing tablets and the facility could be subdivided into three smaller rooms.

“The schedule and program have been organized to use the lecture room for various team-teaching approaches,” states the dedication program. “Students will have opportunities to attack problems in seminar groups or pursue individual research projects of their own choice.”

Finley’s founding faculty was expected to “set in motion a new kind of teaching – one centered on imagination, intuitive thinking and inquiry,” according to the dedication program. “Students will be developed so that they can perceive with greater discrimination. It is hoped that teachers will develop profound questions which revolve around the major themes which hold a subject together.”

The gymnasium featured a system of accordion-like doors that could be opened or closed to divide the space into three smaller gyms or leave it as a wide open space for games and special events.

“The many classrooms are designed and tailor-made for specific subject matter,” states the dedication program. “These rooms are grouped and arranged so that a body of students may be assigned to a particular area of the building. In this manner, excessive traffic may be curtailed.”

An indoor courtyard was also incorporated into Finley’s design. Known as the foyer for decades, it is the main lobby of the school. When the building opened in September 1965, it was a wide open space with a winding wall about four feet in height with small openings in it in the middle of the area. A glass roof provided cover and “adds to the aesthetic beauty of the school,” according to the dedication program.

“A large planter under an attractive open staircase will contain many species of live plants and shrubbery,” states the dedication program. “Students will maintain this as an adjunct of the Earth Science classes. The courtyard will be used for many exhibits as well as for musical programs.”

What was cutting edge in 1965 is no longer the case more than 55 years later, but Finley’s features continue to serve the community well as the school confidently moves ahead toward the future. 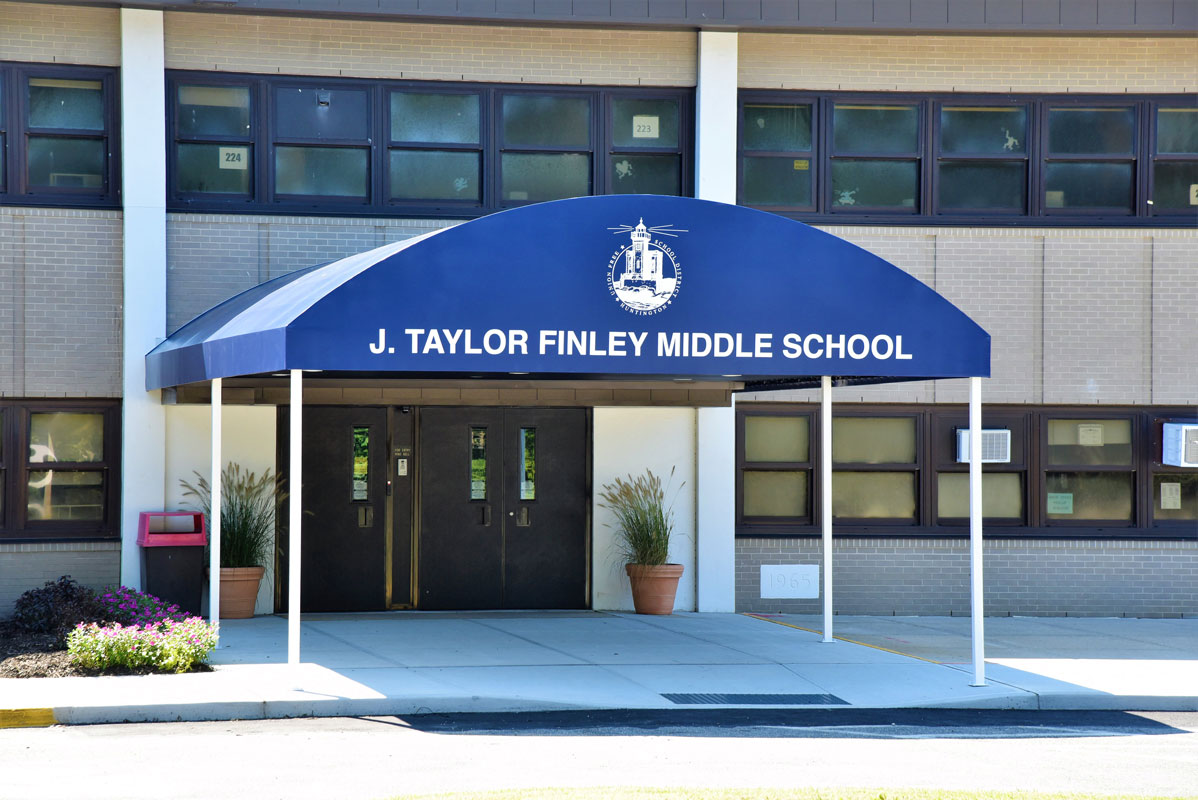 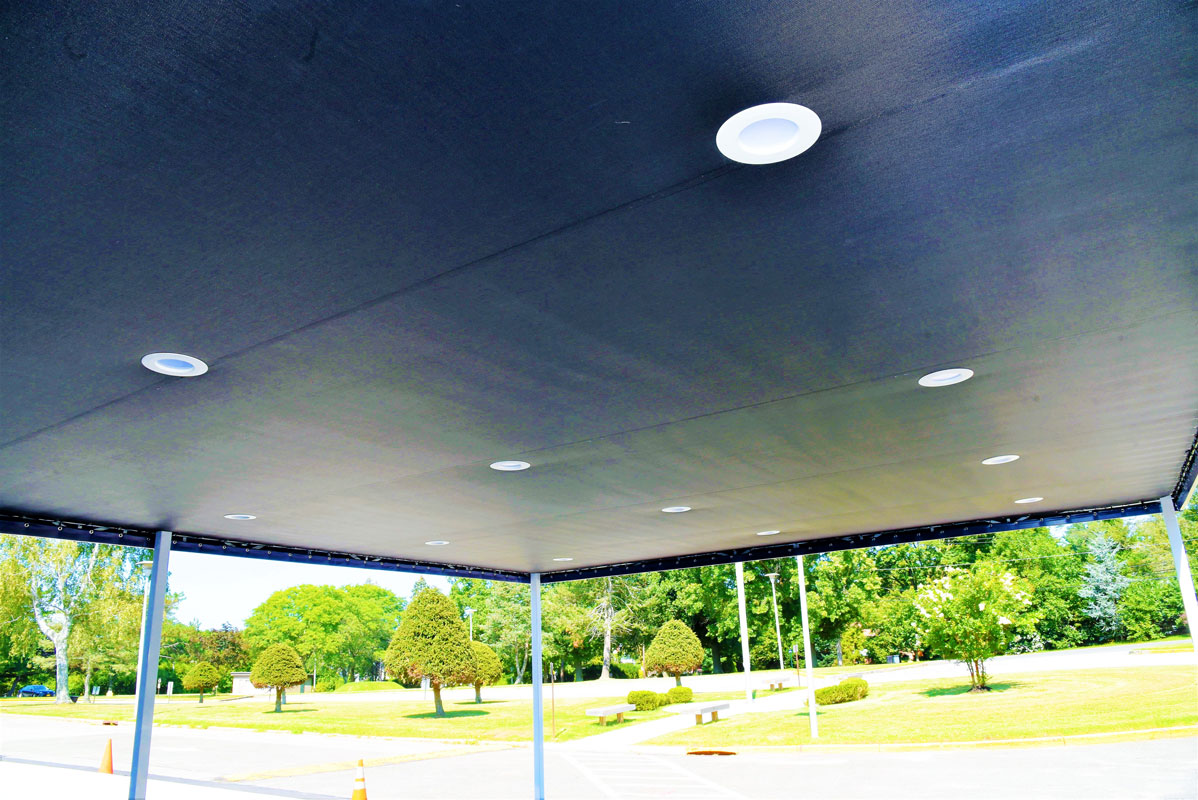 There is recessed lighting beneath each of the canopies.

There is recessed lighting beneath each of the canopies.