While the Huntington High School JV girls’ soccer team struggled to win games, players worked hard and developed a camaraderie that was hard to beat.

“Emersen was our force at the top and our leading goal scorer,” Canino said. “When she got the ball we knew she could score for us. Riley was vital up top because she always knew how to make an assist and feed it to her teammates. Jenna and Katherine held down our defense along with our goalie, Ashley. Kaylee hustled100 percent in the games and always there to feed the forwards the ball.”

While the Huntington JV had several inexperienced players and dropped some games by lopsided margins, the Blue Devils never lost their pride.

“I believe our biggest team accomplishment was our win over William Floyd in our Kicks for Cancer game,” Canino said. “It wasn’t just the win, it was the way the girls came together that day. The girls fully understood that game was about more than soccer. They went out and played for the survivors; for those fighting and those who have passed from cancer. They played with such honor and poise. It was truly a special day. I was honored to be part of it and to be their coach.”

Several of the JV’s players are expected to make the varsity team next fall. In the meantime, Canino is encouraging all of them to play as much soccer as possible and to consider joining other Huntington sports teams. “The main thing is for them to stay active,” she added. 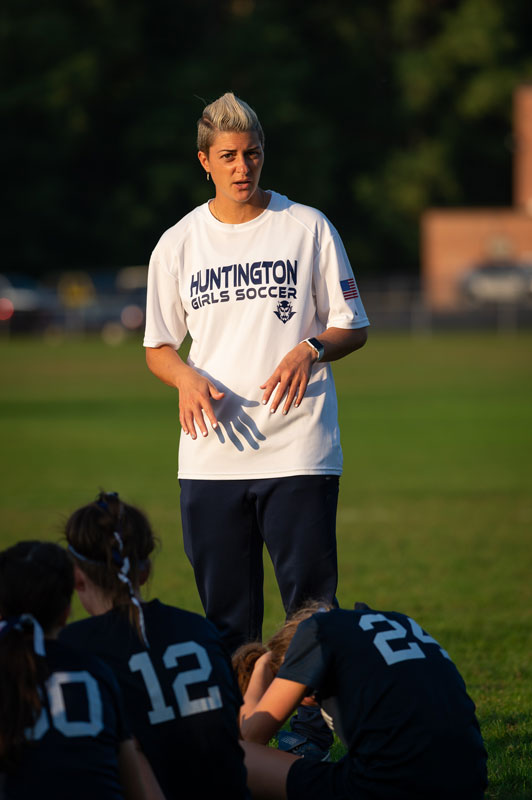 Kimberly Castro Perdomo is on the ball for Huntington. (Darin Reed photo)

Kimberly Castro Perdomo is on the ball for Huntington. (Darin Reed photo)