If officials had more time to plan for it, last Saturday’s football game between Huntington and Long Beach could have been named the Friendship Bowl. While the competition between the sidelines was fierce, the warm feelings between the two schools couldn’t have been clearer as they came together for a post-game photo at midfield.

Long Beach learned on Thursday that its game on Saturday was canceled due to a COVID quarantine at its scheduled opponent. Huntington got the bad news from its opponent for the same reason on Friday at 3 p.m. That’s when the phone calls started. The Blue Devils worked feverishly to line up a replacement. 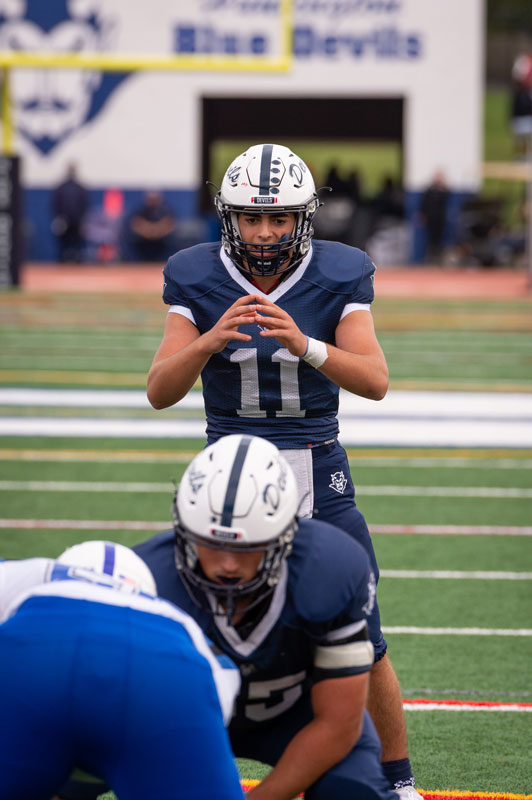 It was Homecoming Day in Huntington so the cancellation of the centerpiece football game would have been nothing short of devastating for the school community. Halftime activities included the crowning of the Homecoming king and queen, the announcement of the winning class float, a stirring exhibit by the Blue Devil marching band and a thrilling performance by the Highsteppers competitive dance team.

Faced with the loss of its scheduled Homecoming Day opponent, phone calls were made to several schools that lacked a game on Saturday. When word reached Huntington that Long Beach was one such school, efforts were made to reach Marines’ athletic director Arnold Epstein, who was immediately receptive and couldn’t have been more gracious.

Mr. Epstein walked out on the Long Beach football practice field to bring the possibility of a game with Huntington to his head coach, Scott Martin, who was also receptive. The two school’s athletic directors arranged for an immediate telephone conversation between Coach Martin and Huntington head coach Steve Muller to touch base on how the teams matched up. Minutes later, the game was on.

Mr. Epstein ordered two buses and called back to get Huntington High School’s street address. He sent the Long Beach roster so programs could be printed. The Blue Devils contacted Section XI and the referees to confirm there would indeed be a varsity game played on Saturday at 1:30 p.m.

Bethpage athletic director John Franchi, who completed his student teaching requirements in Huntington UFSD more than two decades ago served as the intermediary that brought the two athletic directors together.

In a little less than one hour, a replacement game was put together that met the needs of both Long Beach and Huntington, which had never met before on a football field.

The game itself played out before a near capacity crowd at Blue Devil Stadium. While Huntington won the game, 28-7 the contest was actually much closer than the score indicates.

“Long Beach played a great game,” Huntington head coach Steve Muller said. “Scott Martin and his staff are excellent coaches and the Long Beach kids are tough; very tough. They gave us all that we could handle. We got a few breaks and our kids played a really good game. Neither team knew what to expect from the other so we played conservatively. It was a really nice experience for everyone.”

The Blue Devils took an early lead, but Long Beach kept it close for most of the game. The Marines were set back by a couple of miscues including a potential touchdown pass that slipped through the fingers of the intended receiver and a fumble in the end zone that Huntington recovered for a touchback.

The 14-7 halftime score showed just how closely the teams were matched. Huntington went on to use 14 unanswered second half points to seal the win.

Mr. Epstein attended the game and moved about on the sidelines, clearly enjoying himself. Huntington Superintendent James W. Polansky walked over to thank the Long Beach athletic director for stepping up at the last minute and agreeing to send the Marines to Huntington for the game. It all came together at 4 p.m. on Friday and by noon on Saturday the Marines were warming up for the game on the Blue Devil Stadium turf.

When the game ended, the two teams gathered on the 50 yard line for a joint photo of players and coaches to commemorate the occasion. Long Beach and Huntington players hugged each other. Several times during the game, the public address announcer offered Huntington’s thanks to Mr. Epstein and Coach Martin “for helping to make this game happen.” Each time Blue Devil fans erupted in applause.

Following the post-game photo, Coach Martin and his assistants brought his team together to speak with his players. Mr. Polansky walked over and addressed the Long Beach contingent, offering one final round of thanks to the Marines for not only stepping in to play the game, but for proving to be a most worthy opponent on a very special Homecoming Day in Huntington.

Friendship Bowl 2021 will always be remembered by those who played in the game or by the fans who comprised the big crowd. 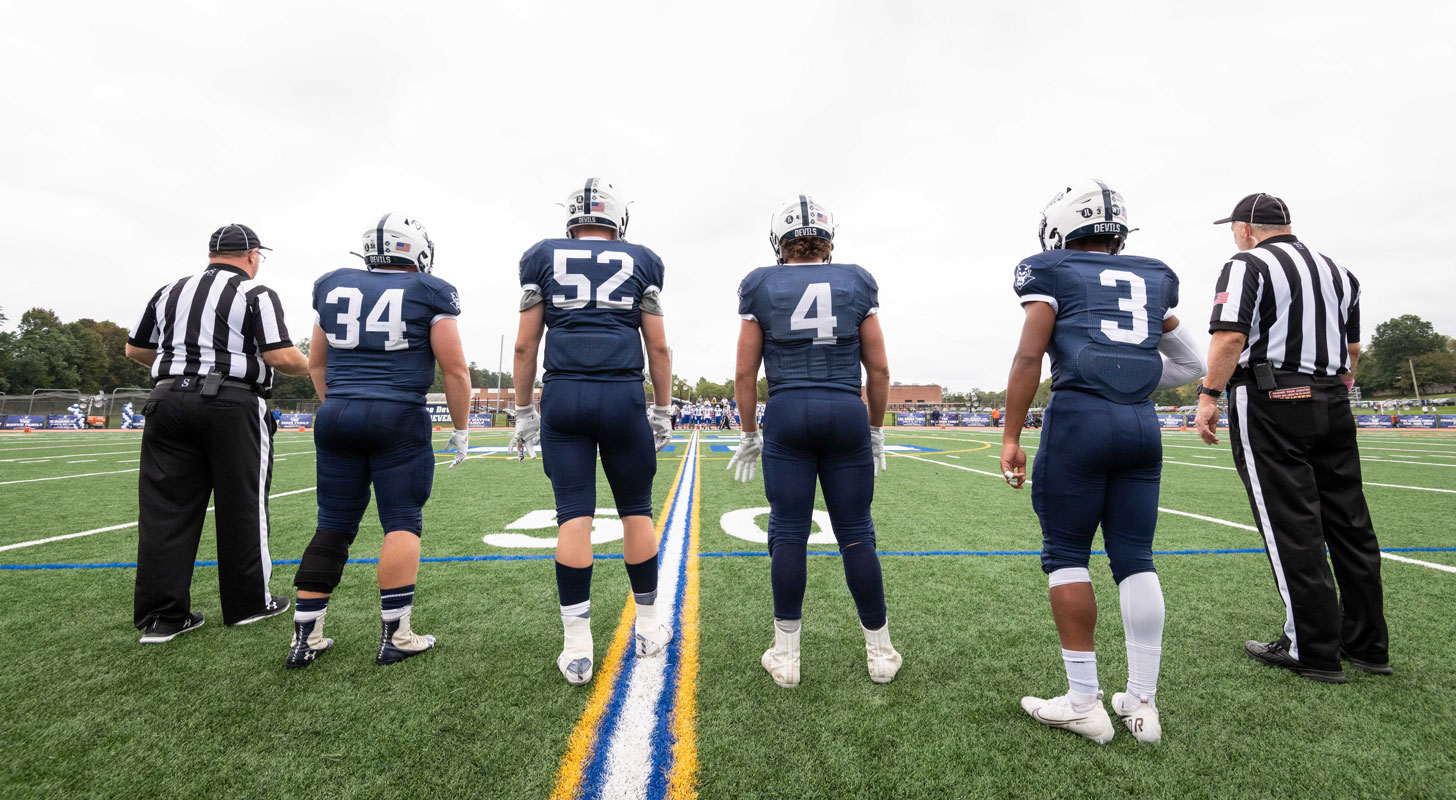 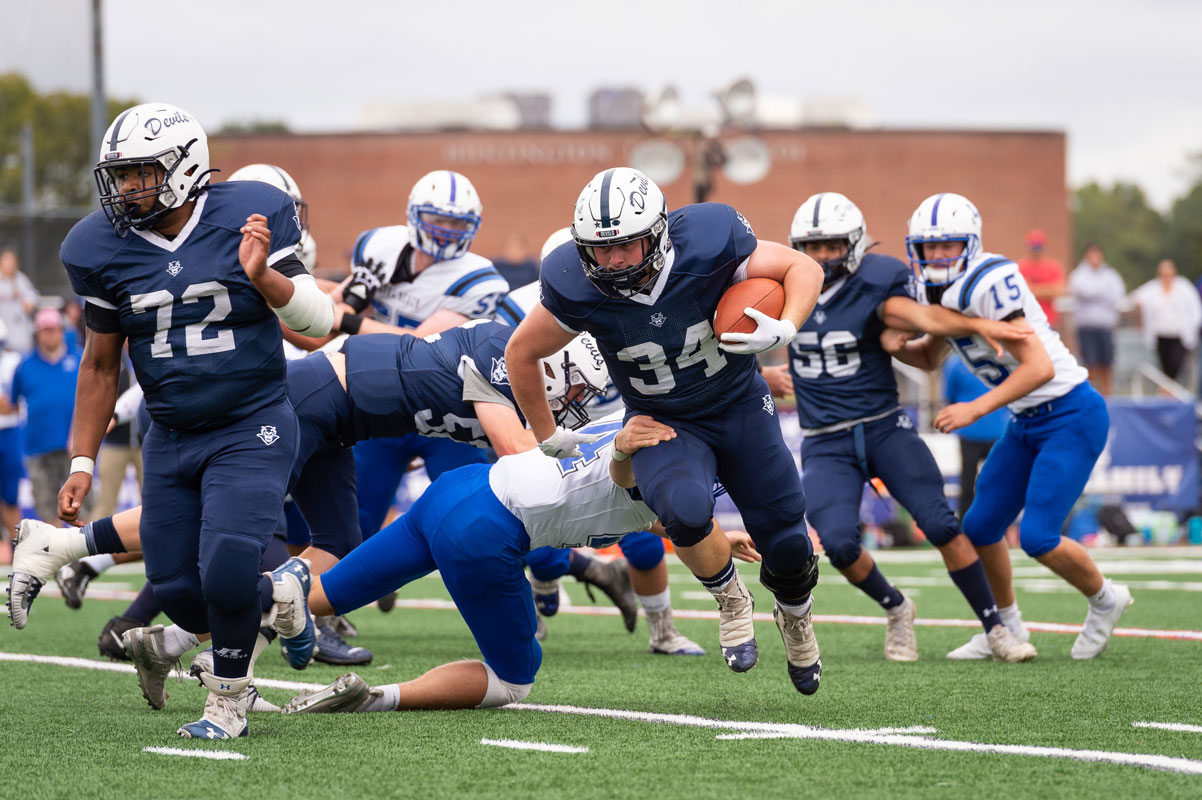 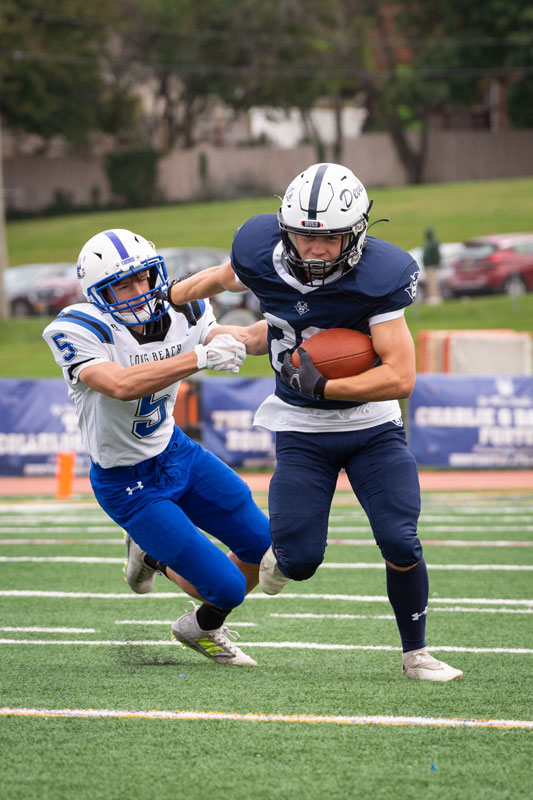 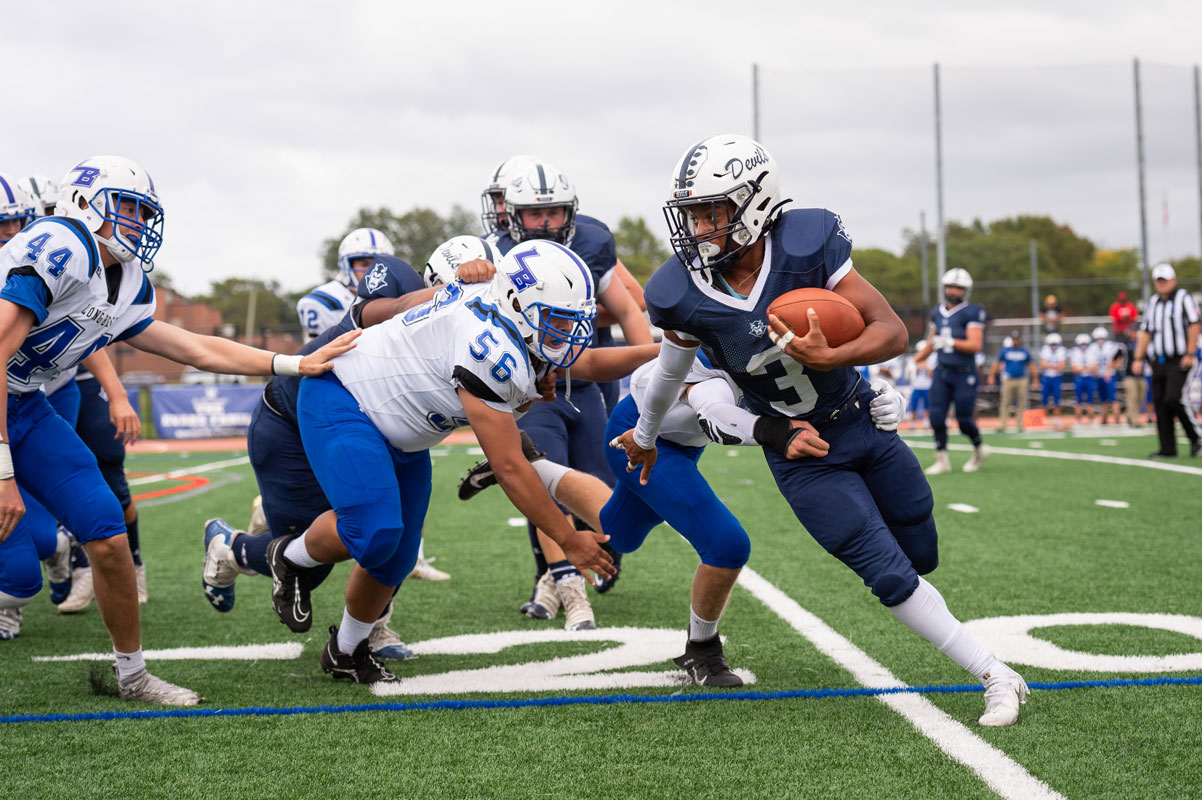