The Huntington High School girls’ cross country team is always a close-knit group. The teenagers enjoy training and competing together and they are especially good at encouraging one another.

Coached by Huntington physical education teacher Elizabeth Andersen and captained by senior Erin Ye and junior Talia Addeo, this year’s roster consisted of nine runners, seven of which are underclassmen. Science teacher Sarah Hall was a volunteer assistant coach with the team.

Sophomore Jessica Kuom led the Blue Devils, placing 16th in the Suffolk Sophomore Championships at Sunken Meadow State Park. The teenager ran the 2.5 mile race in a personal best time of 19:05. Her fastest time on Sunken Meadow’s 5K course was 25:35. 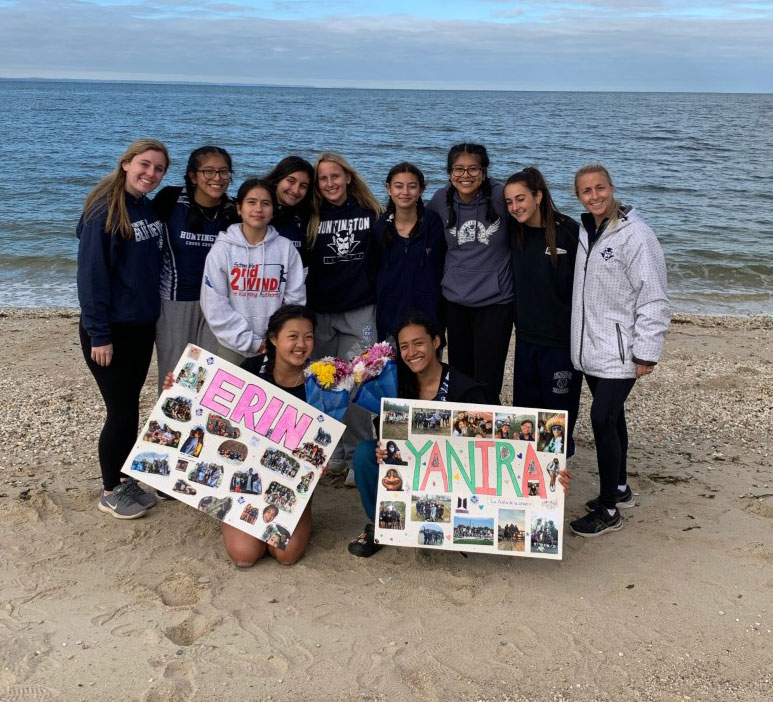 Andersen said Kuom has “much potential” in the sport as she moves forward. “Jessica has expressed how her love for the sport has grown and how she is motivated to train hard over the next year and come into her junior season stronger than ever,” Andersen said.

“Damaris has a passion and love for running and her ‘never-give-up’ attitude is unmatchable,” Andersen said. “Damaris is only a sophomore and had the fastest 5K time on our team this year. She pushes everyone to be the best version of themselves. She PR’d in both the 5K and 2.5 mile distances this year and she is looking to keep improving in the future. Her main focus for training in the off season is to work on speed.”

Andrea also made real strides this fall. “Despite a few injuries over the past couple of years, Andrea always manages to remain focused and run in the top five of every race,” Andersen said. “Like her sister, she, too, has a strong passion for running. This year was a strong and competitive year for Andrea and she can’t wait to step up as a leader next year.”

Senior Yanira Rivera also ran well. “This is only Yanira’s second year of cross country and she is a completely different runner than she was last year,” Andersen said. “Initially, she would tire easily after only running for 10 minutes. She would be in disbelief about how difficult some of the runs and workouts would be. This year, she came in 10 times stronger. Her running form, endurance and experience all improved. She made it into the top five during most races. The girls would describe her as a motivational leader. During every workout and race, Yanira tackled it with a strong body, heart and mind.”

The highlight of the season came in the sophomore championship race. “Our four girls crushed it,” Andersen said. Kuom and both Damaris and Andrea Mani-Munoz posted personal best times and Jannel Marroquin was within 20 seconds of her personal best.

“We came in fifth place out of 11 teams and it was a spectacular race and the girls felt their best,” Andersen said. “We have a young team, so this was a great opportunity to see our team match up against other schools. The whole team attended and cheered on the girls at different parts of the course. It was a perfect way to end our season on a high note.”

The Blue Devils’ two team captains, Erin Ye and Talia Addeo also compiled very nice seasons. “These two are role models and strong leaders for our team,” Andersen said. “Erin has been on the team for four years and Talia for three. They love the sport and have been so reliable. They were my right hand women both in-season and off-season. I can’t thank them enough for the spectacular dedication they give every year.”

Sarah Krisch and Mackenzie Ahern were two more underclassmen who left an imprint on the team. “They both enjoyed their first year of cross country and are looking forward to next fall’s season as seniors,” Andersen said. “They loved the team atmosphere and culture and they bring a lot of positivity to practices and meets.”