Retired Huntington School District teacher and principal Edward Abrahamson passed away on November 15. He was 86.

Mr. Abrahamson’s career in Huntington kicked off in September 1957 when he was hired to work as a classroom teacher by Woodbury Avenue School Principal J. Allen Matthews. When Jefferson Elementary School came online in September 1962, Mr. Abrahamson moved with Mr. Matthews to the new building erected on Oakwood Road.

A photo of Edward Abrahamson found in the Huntington UFSD archives.

After more than 20 years as a Huntington School District principal, Mr. Abrahamson retired at the end of the school year in June 1986. A big party was held on his behalf at the Northport Yacht Club. He spent the next three decades continuing to reside in the area until his recent passing. 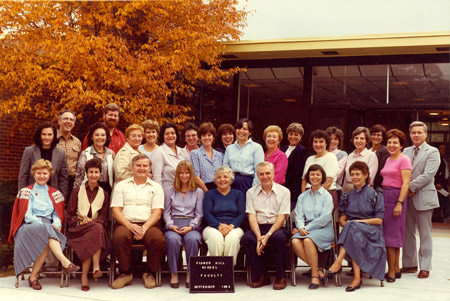 Ed Abrahamson with the Flower Hill
faculty in September 1984.

“I first met Ed when he became my sixth grade teacher at Jefferson,” recalled Laraine Schirripa, who went on to teach in Huntington for more than three decades. “He was a great teacher and very popular with the students at Jefferson. Everyone wanted to be in his class. It was during my sixth grade year that he was appointed principal at Flower Hill, so he did not finish the year as my teacher. When I graduated college, Ed had me substitute at Flower Hill until a permanent full-time job opened up. I initially went to Washington, but returned to Flower Hill and worked for Ed until his retirement. He was a gem to work for. He ran a nice pleasant school where everyone got along and had fun. He loved the kids. When he came into your room he would sit next to the kids as if he was one of them. He was very supportive.”

When Mr. Abrahamson retired from his post, he was succeeded as principal by Anthony Barresi. “He was an outstanding educator and leader,” said Mr. Barresi about his predecessor. “Ed was a great consensus builder who created an exceptional learning environment at Flower Hill.”