The Rock at Huntington High School has been the canvas upon which students and community members have painted heartfelt messages for decades. Located on the corner of Holdsworth Drive and the northern entrance to the campus, the large rock most likely originated in the New England area. It was dragged down to Long Island during the Ice Age and left here when the Earth’s temperatures warmed and the ice melted and gradually retreated to the north.

The huge boulder was unearthed when New York Telephone erected a building on the corner of Horizon Drive and Holdsworth Drive shortly after the 150 acre H. Bellas Hess estate was sold off and developed. The Rock sat on that corner for decades. (After New York Telephone moved, the site was occupied by the Pederson-Krag counseling center, which has now merged with WellLife Network.) 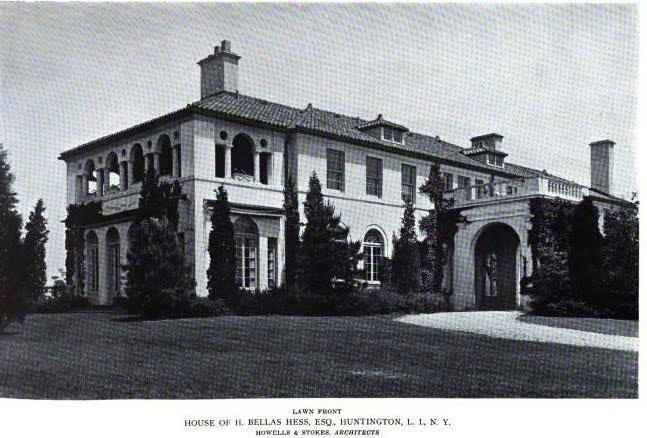 This estate was located on land now occupied by the Big H Shopping Center, Huntington Hospital and dozens of area homes.

Huntington High School students began writing messages on the boulder in the 1960s. It was even tarred and feathered once. The paint colors used and the messages themselves were periodically particularly unsightly. The Rock has been painted and repainted thousands of times over the past 60 years.

By September 1986, New York Telephone had enough. A spokesman said The Rock began to resemble “a graffiti-adorned subway car that has run amok in suburbia.” The final straw came when the company’s newly resurfaced parking lot was painted over with various slogans not far from The Rock.

The telephone company made arrangements to have the boulder removed and relocated to the town dump in East Northport. On the appointed day, the truck hired to transport the boulder was met by a Town Highway Department crew that put the brakes on the job.

A survey was ordered to determine with finality who exactly owned the property that boulder rested upon. Once it was found that the telephone company’s landlord owned the land, a bulldozer and flatbed truck returned to remove it. Enter Huntington High School Principal James Salvatore. He quickly made his way down to the site and started shouting, “What are you doing to my rock?” He then sat on it while wearing his suit. The photograph went viral after Newsday ran it in the newspaper on October 16, 1986.

The removal project was called off a second time by telephone company officials. Following negotiations in Mr. Salvatore’s office, it was decided to move The Rock to its current location on school grounds. The $900 cost to move it was covered by New York Telephone. Huntington UFSD agreed to clean the parking lot of the painted slogans splattered across the area.

The Rock is huge. It measures four feet deep, six feet high and eight feet wide. It is comprised of either granite or schist, which is defined as a “medium grade metamorphic rock formed from mudstone or shale.”

The boulder weighs approximately 19 tons or about 193 pounds per cubic foot. Today it sits on a concrete base and is situated in a way that provides students and community members with plenty of room to work and pose for photos.

Painted messages have announced school, club and athletic team achievements, personal accomplishments, special events, terrible tragedies befalling alumni and the country and times of joy. It has been the site of vigils as well as moments of happiness.

After The Rock was saved and moved to the high school campus, it was the focus of the 1987 edition of The Huntingtonian, Huntington’s annual yearbook. The Huntingtonian proclaimed 1987 as The Year of the Rock. The yearbook cover photo featured a can of spray paint against a blue background. The can of paint was emblazoned with a photo of The Rock and a hand could be seen with the index finger pushing down on the nozzle and paint spraying out from it. There are two full pages photos in the yearbook of The Rock being moved from the New York Telephone property. This was a major event at the time.

An essential part of the Huntington High School experience since shortly after the building opened in late November 1958, The Rock continues to be a focal point for the entire school community. 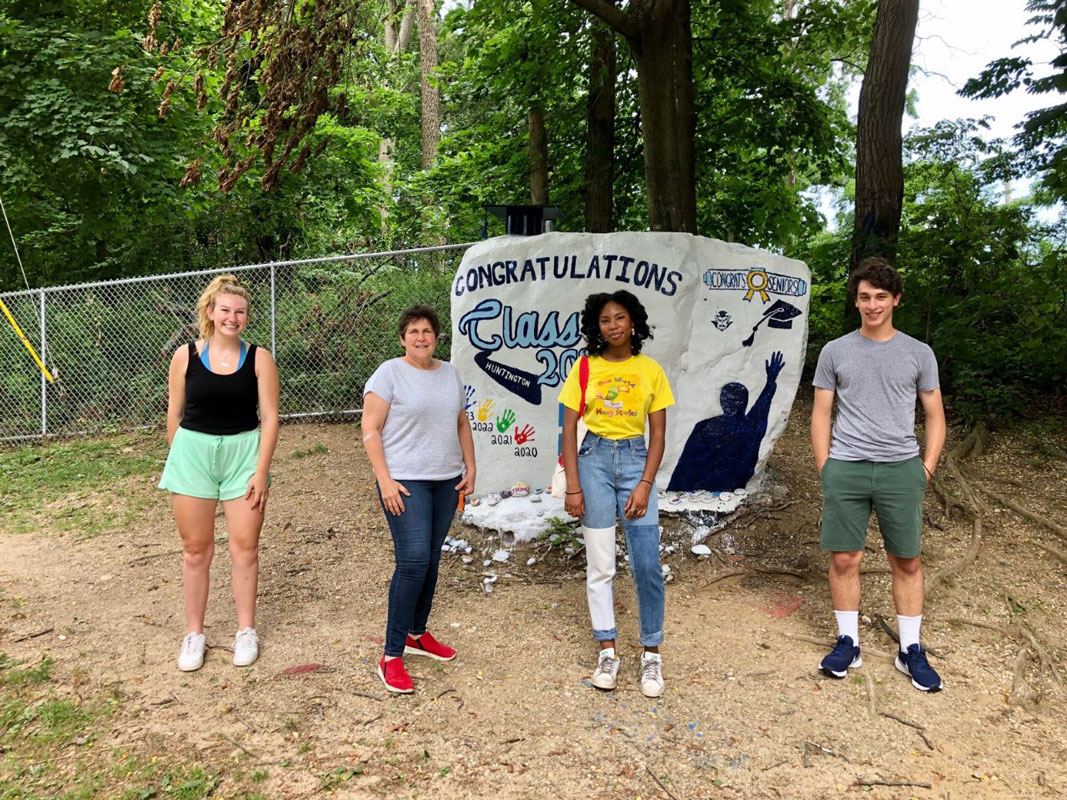 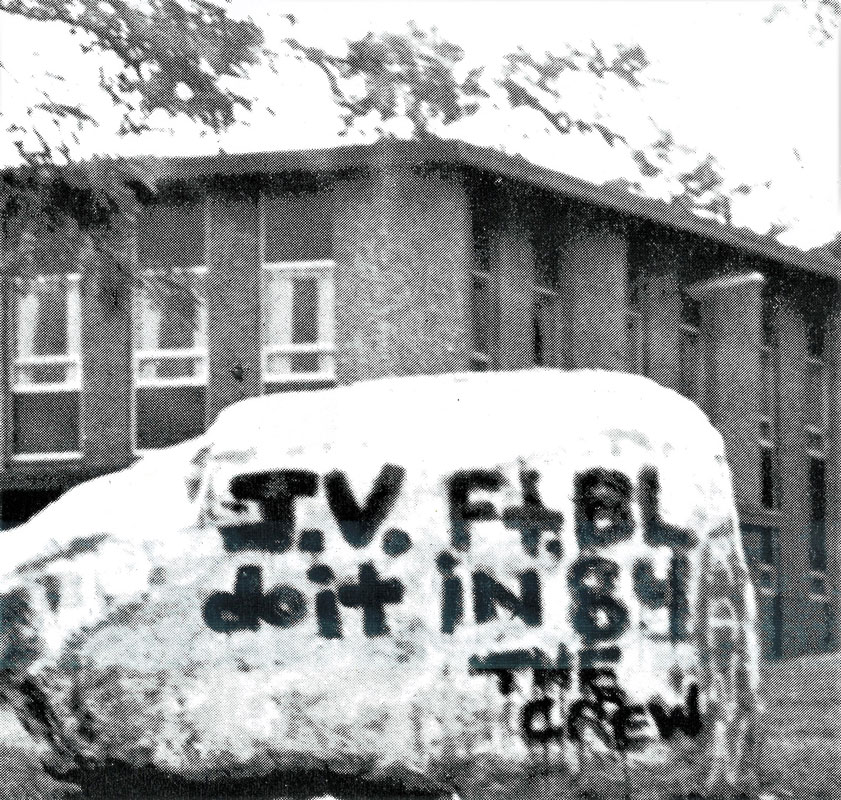 The Rock on the corner of Horizon and Holdsworth Drives in 1984 with New York Telephone in the background. 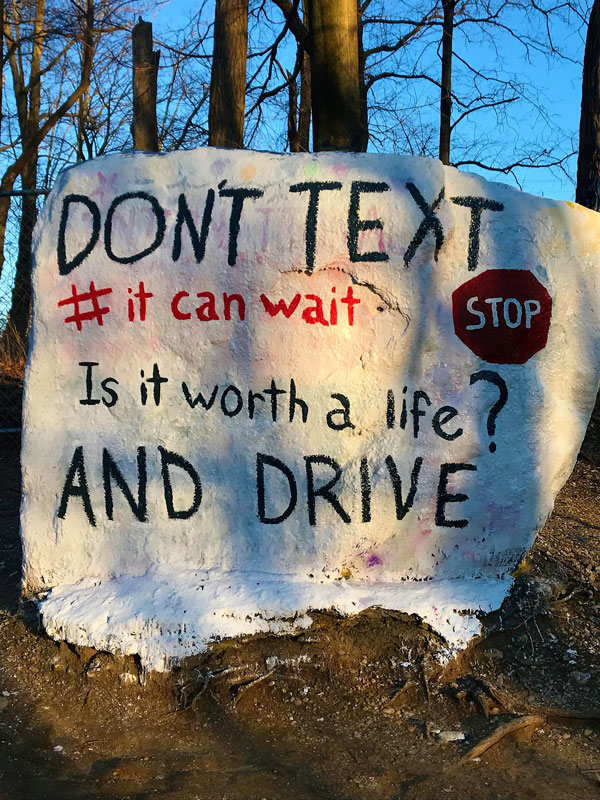 The Rock was painted during Distracted Driving Week at Huntington High School. 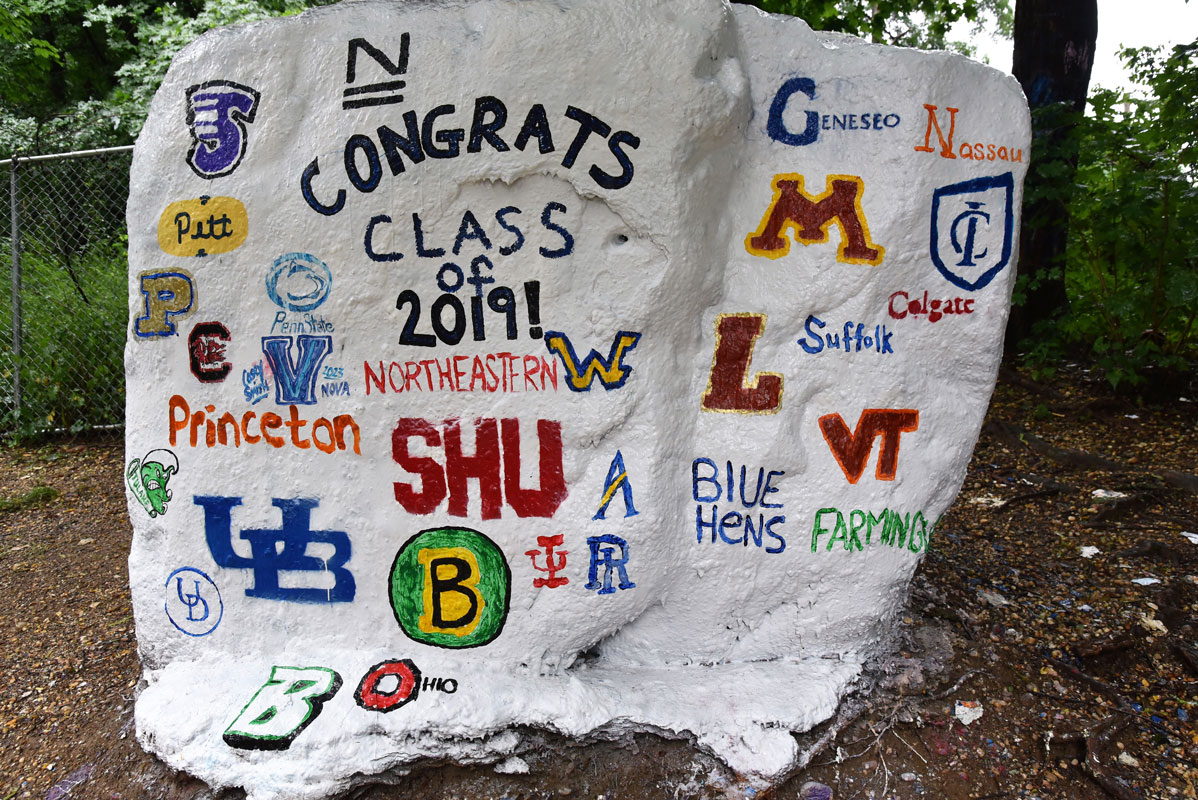 The parents of seniors painted The Rock with the colleges their child would be attending.

The Rock on the corner of Horizon and Holdsworth Drives in 1984 with New York Telephone in the background.

The Rock was painted during Distracted Driving Week at Huntington High School.

The parents of seniors painted The Rock with the colleges their child would be attending.