The Huntington wrestling team will send seven Blue Devil matmen to the Section XI Championships next weekend at Suffolk-West in Brentwood.

All seven of the grapplers finished in the top three of their respective weight classes at last Saturday’s League III tournament at Northport.

Huntington junior Joe Petrone paced the Blue Devils, winning the league crown at 106 lbs. Petrone had pins in 0:47 seconds and 5:19 in the quarterfinal and semifinals rounds before topping Smithtown West’s Kenneth Leveritch in the finals, 9-5.

Burton had a pin in 0:54 and a 20-3 technical fall to advance to the finals, where he dropped a 5-1 decision to Northport’s Aiden Sewell.

McDonald had thrilling matches throughout the tournament. The senior had a quarterfinal round pin in 1:51 and a come-from-behind 11-9 decision in the semifinals before dropping a decision in the finals to Copiague’s Marvin Lobo.

Smith advanced to the finals with a 0:45 second pin and 6-1 and 9-0 decisions before falling to Lindenhurst’s Ethan Aulino in the championship bout.

Cirlincione (99 lbs.) won a pair of matches, including a pin of Newfield’s Jason Gabbe in 2:27 for third place. Nicotra (152 lbs.) pinned three opponents in a combined time of 1:45 in the tournament and won the Most Falls in the Amount of Time Award.

Nicotra pinned Lindenhurst’s Ryan Sims in 10 seconds in a consolation bout to finish third in the tournament and earn a berth in the Section XI Championships.

Tudisco (195 lbs.) had a pair of pins, including one in 20 seconds over Newfield’s Kirk Stevenson for third place.

The Section XI tournament is set for Saturday and Sunday at Suffolk-West in Brentwood. The top finishers in each of the 15 weight classes will advance to the state tournament in Albany. 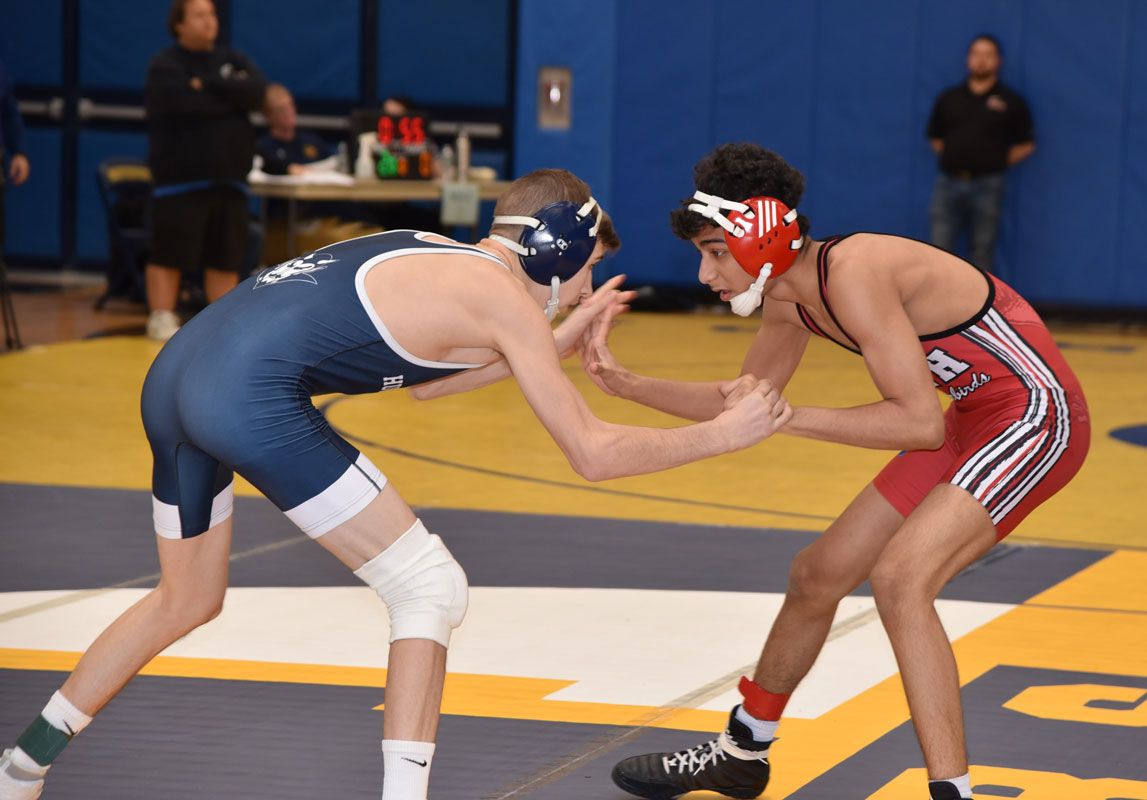 Joe Petrone (left) sets up an opponent for a takedown. 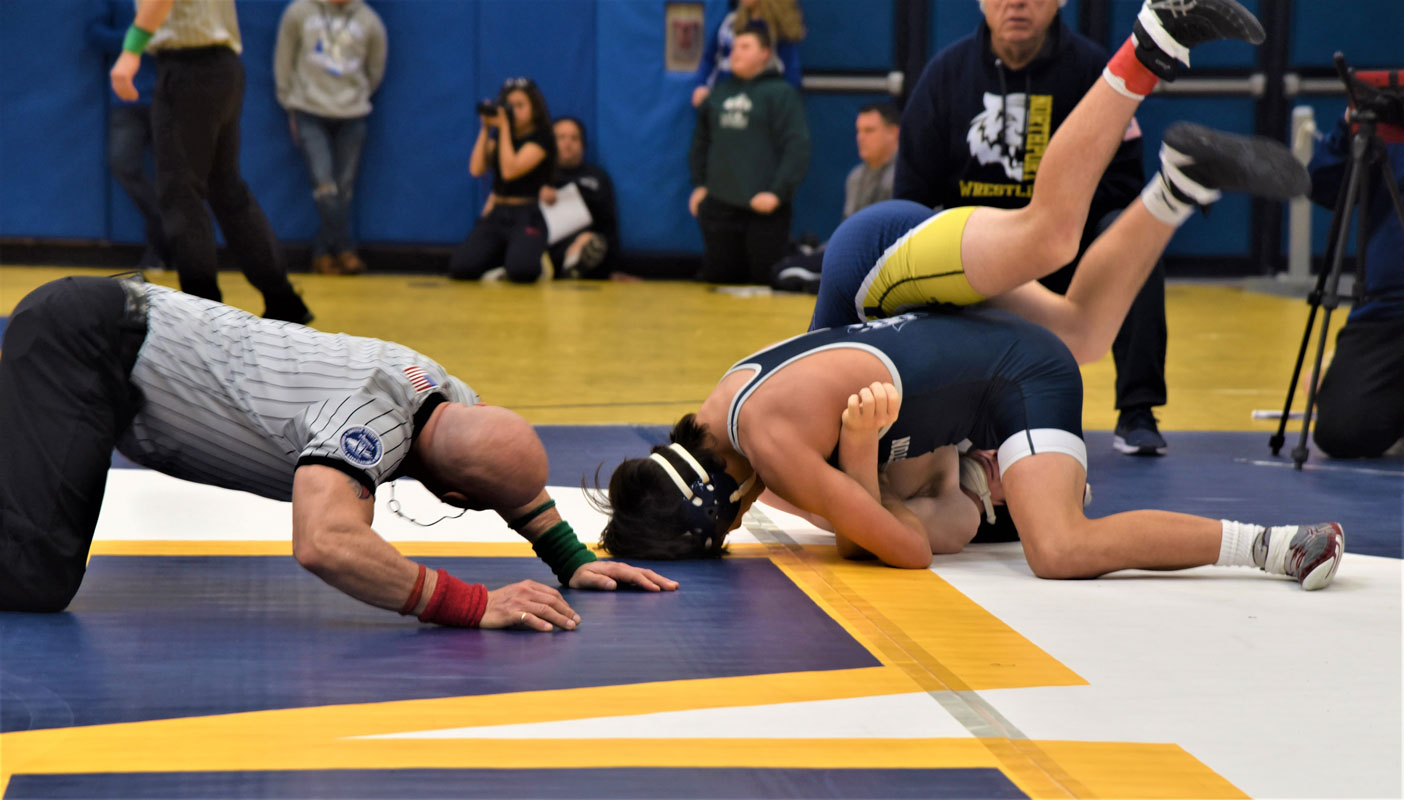 Huntington junior Joe Nicotra won the Most Pins in the Least Amount of Time Award at the league tournament. 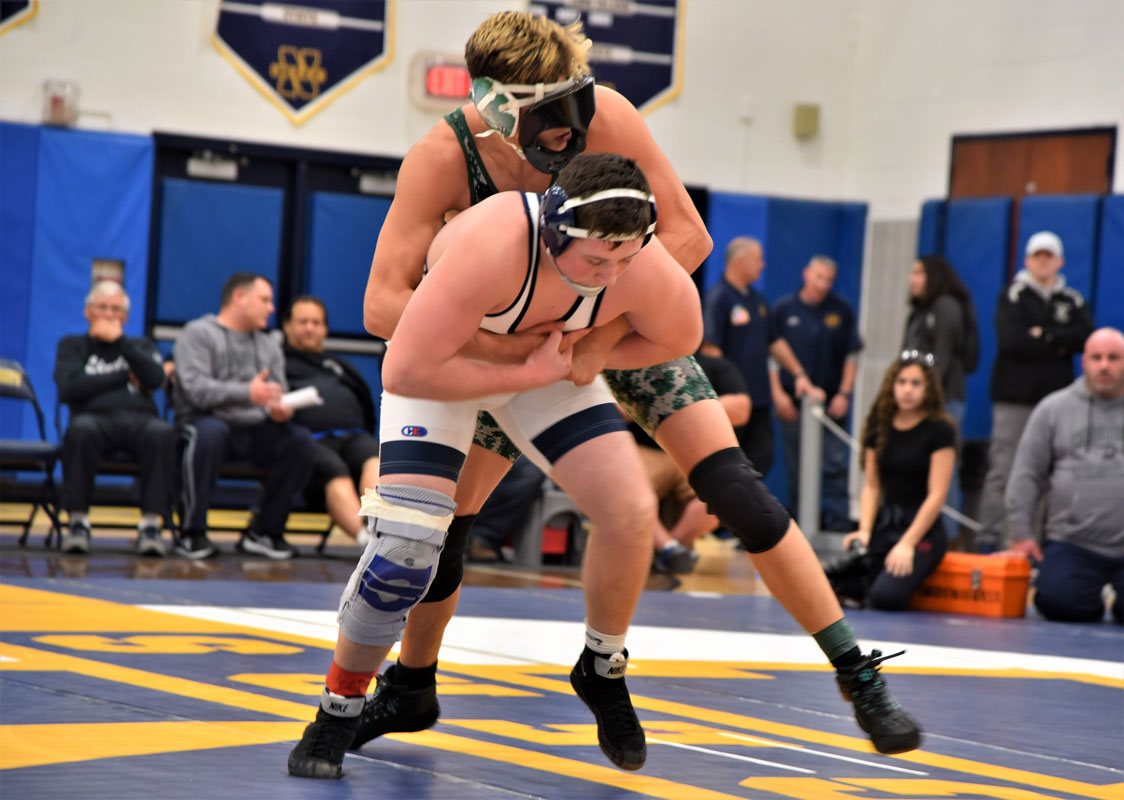 Joe Petrone (left) sets up an opponent for a takdown.

Huntington junior won the Most Pins in the Least Amount of Time Award at the league tournament.